Tesla has surpassed GM and Ford in market value, but it is not without its challenges.

The automaker's shares are trading at record levels, and it has surpassed General Motors and Ford in market value. It's about to introduce its first mass-market electric car, the Model 3 sedan, as well as a line of solar panels that look like roof tiles.

CEO Elon Musk is also enticing fans with new vehicles, including a semi-truck it plans to show this fall and the Model Y SUV, which he said will go on sale in 2019.

But the company is not without its challenges. Or, as Musk put it at the hour-long meeting, "Tesla's like a drama magnet."

Here are three issues Musk addressed at the meeting.

A group of Connecticut pension funds had called for annual elections, saying it would improve accountability. They also say conflicts of interest "plague" Tesla's board. Musk's brother, Kimbal, is a board member. Tesla's lead independent director, Antonio Gracias, also serves on the board of Musk's rocket company, SpaceX, and is the CEO of a private equity fund backed by Musk.

But shareholders sided with Tesla, which says its mission requires long-term strategic planning and three-year terms ensure that board members aren't distracted by short-term returns. Official results of the vote will be released within a few days, the company said.

Tesla hasn't said how many people have put down $1,000 refundable deposits for the Model 3, but Musk said Tuesday people who put down a deposit now won't get a car until the end of 2018, indicating it could be close to 500,000.

Whether Tesla can meet its production goals is an open question. The company's vehicles have often faced delays getting to market. Its last new vehicle, the Model X SUV, was delayed nearly 18 months. Musk says the Model 3 is much simpler to make, but 14-year-old Tesla has no experience producing and selling vehicles in high volumes. Tesla made just 84,000 cars last year. Bigger rivals like GM, Volkswagen and Toyota routinely sell more than 10 million per year.

"It's crazy hard to make cars," Musk said Tuesday. "There's 10,000 unique items, and it only moves as fast as the slowest item."

Even if the Model 3 is on time, servicing all those vehicles will still be a challenge. Model S and Model X owners are already worried about having to share Tesla's Supercharger stations with an influx of new cars. And while Tesla is promising to increase its network of stores and service centers by 30 percent this year, it began 2017 with just 250 service centers worldwide. That leaves many potential owners miles from a service center.

Musk says a new fleet of mobile service trucks will be deployed to help customers who are far from service centers. Tesla also plans to double its global high-speed charging points to 10,000 by the end of this year and increase them by another 50 percent to 100 percent in 2018.

COMPETITION: Until now, Tesla has owned the market for fully-electric vehicles that can go 200 miles or more on a charge. But that's changing. GM beat Tesla to the mass market with the Chevrolet Bolt, a $36,000 car that goes 238 miles per charge. Audi plans to introduce an electric SUV with 300 miles of range next year; Ford will have one by 2020. Volkswagen plans more than 30 electric vehicles by 2025.

Automotive competitors like Mercedes and Volvo — not to mention tech companies like Google and Uber — can also match Tesla's efforts to develop self-driving vehicles. And they have deeper pockets. Tesla has had only two profitable quarters in its seven years as a public company.

Morgan Stanley analyst Adam Jonas, who has a $305 price target on Tesla's stock, says investors need to consider whether Tesla should continue to operate as a stand-alone market disruptor or if it should merge with a bigger entity, like Apple.

But Musk gave no hint that Tesla is worried about competition or is planning a merger. He said Tesla, which is based in Palo Alto, California, is actively considering three other plant sites and could ultimately build 10 or 20 assembly plants to meet demand. At least one of those will be built by 2019 to manufacture the Model Y, he said, because Tesla's current plant in California is "bursting at the seams."

Is Tesla Engaging in ‘Risky’ Behavior? 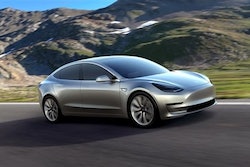 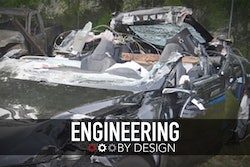