They used hundreds of photos combined with videos of the climber's movements. 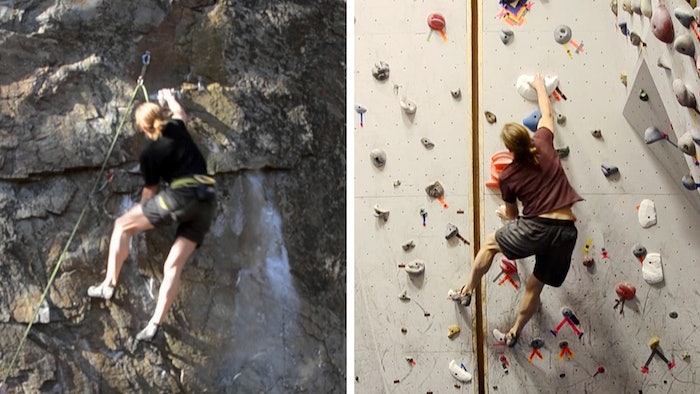 In this combo of images from video provided by Dartmouth College, a climber ascends an outdoor rock face, left, on Dec. 12, 2015 in Rumney, N.H., and another climber ascends a replica indoor climbing wall, right, on Jan. 16, 2016, in Hanover, N.H. Using three-dimensional geometry, the three-dimensional replica of the rock wall was created by tracking a climber's hand and foot positions and by estimating the contact forces.
Christos Mousas/Dartmouth College via AP

HANOVER, N.H. (AP) — After spending time in Switzerland studying and hiking in the Alps, Dartmouth assistant professor Emily Whiting wanted to relive those climbs back home.

Upon her return to the United States, she and a group of colleagues contemplated how they might recreate the climbs indoors.

Using 3-D modeling and digital fabrication, the team developed a system that replicates the hardest stretches of climb, so that it can be practiced on indoor climbing walls. In a presentation at a human computer interaction conference last month, the team demonstrated how they replicated a climb in Rumney, New Hampshire, and a sandstone crag near St. George in Utah (view photos in gallery).

Fellow postdoctoral scholar Ladislav Kavan, who is now at the University of Utah, did the work out of Utah while Whiting was in New Hampshire.

The two, along with their team, also wanted to address problems that vex many seasoned climbers — the challenges of mastering a route that might be a world away or one that might be too fragile to practice on.

"What if you could take the experience of climbing places like these monuments but not climb the physical thing, actually bring it home to your local gym," Whiting said. "You would still have the physical experience of climbing it without causing the erosion and damage to the location. There is also the aspect of accessibility, like if this is some place in Thailand or some remote location and you want to train for the route."

Whiting and her colleagues first did a 3-D reconstruction of a wall using hundreds of photos at different angles. Then, they combined that with video showing the climber's movements. That data helped the researchers identify the key parts of the climb, allowing them to create fabricated holds which were then attached to a climbing wall.

"When you are climbing it, you're grasping onto small portions of it and so we wanted to determine where rock climbers actually grabbing onto the rock face," she said.

There are plenty of tools in climbing gyms to practice, including the campus board, a series of slats that hang on a wall at various angles so that climbers can practice strength training. And a few years back, Matyas Luzan replicated a tough stretch of a climb in Germany — he crafted the holds from wood and varnished them to feel like the rocks.

The system that Whiting and Kavan, now at the University of Utah, came up with might be seen as an extension of Luzan's efforts.

Eventually, the researchers envision a system that could one day ingest photos and video. A database of outdoor climbs could then be created, from which holds could be manufactured and available to climbing gyms. They also want to improve the texture of the holds so they feel more like the actual rocks. And there is the visual component — which Whiting hopes one day could be solved by adding virtual reality or projecting images of the climb to a wall.

The climbers that have given the new system a try say their outdoor ascent matched their experience indoors.

"I was kind of blown away at just how precisely the body movements on the indoor climb recreated the outdoor movements," said Billy Braasch, a Dartmouth grad student and climber who participated in the study.

But while Braasch said this could serve as a good practice tool, he acknowledged it might not be for everyone.

"One aspect of climbing that I really love is traveling to a new place and exploring new terrain," he said. "There is something special about being in a new place and testing yourself against a new climb."

Mike Morin, the Northeast regional director of the climbing group Access Fund, who was not involved in the study, also said the system has potential. Climbers might find it "novel" to challenge themselves on iconic routes — or even those closer to home.

"If you're a climber in Boston working on the route at Rumney mentioned in the study, you'd probably be pretty psyched to be able work on the movements of the climb during a training session at your local climbing gym," he said.