He told graduates it's up to them to bring purpose to the world, fight inequality and strengthen the global community. 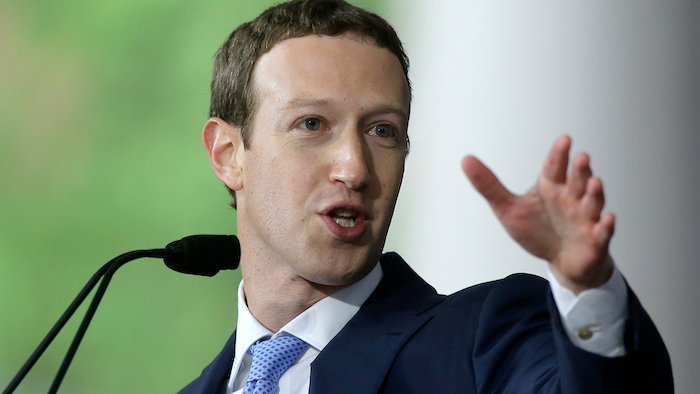 NEW YORK (AP) — Mark Zuckerberg returned Thursday to Harvard, where he launched Facebook and then dropped out, telling graduates it's up to them to bring purpose to the world, fight inequality and strengthen the global community.

"Change starts local. Even global changes start small — with people like us," the Facebook CEO said. He shared stories about graduates such as David Razu Aznar, a former city leader who led the effort to legalize gay marriage in Mexico City, and Agnes Igoye, who grew up in conflict zones in Uganda and now trains law enforcement officers.

"And this is my story too," Zuckerberg added. "A student in a dorm room, connecting one community at a time, and keeping at it until one day we can connect the whole world."

Such lofty talk now comes naturally to Zuckerberg, a 33-year-old billionaire who has committed to giving away nearly all of his wealth. In February, he sketched out an ambitious, if vague, vision for Facebook that committed the company to developing "social infrastructure" that would help build a "global community that works for all of us."

But it also strikes a sharp contrast with the criticism Facebook has taken recently — not so much for connecting the world (a big chunk of it, anyway) as for failing to anticipate how vulnerable that connectedness could be to those who abuse it.

Zuckerberg, who like the graduates is a millennial, started Facebook in his dorm room in 2004. What began as a closed networking site for Harvard students is now a global communications force with nearly 2 billion members. Facebook's founding was the subject of a Hollywood movie, "The Social Network," in 2010.

Facebook's effect has been profound. It has connected people who would have never met otherwise, letting them form supportive networks online and offline. And it has allowed people to communicate in developing countries even if they don't have a phone number or a smartphone.

But it has also served to spread misinformation bordering on propaganda, hateful views and bullying, reflecting the worst parts of humanity back to us.

In his commencement speech, in interviews and in his February manifesto, Zuckerberg is decidedly optimistic about all that. He's been saying he wants to make the world more open and connected for more than a decade now, and he doesn't relent.

He told the graduates how, when Facebook's investors and executives wanted him to sell the company early on, he resisted. "You see, my hope was never to build a company, but to make an impact," he said. But as a young CEO, he never explained this to his co-workers, and the subsequent fight "tore our company apart."

"I wondered if I was just wrong, an impostor, a 22 year-old kid who had no idea how the world worked," Zuckerberg said. "Now, years later, I understand that is how things work with no sense of higher purpose. It's up to us to create it so we can all keep moving forward together."

Later in the speech, Zuckerberg's voice cracked with emotion as he talked about a high school student he mentors who is living in the U.S. illegally. When Zuckerberg asked him what he wants for his birthday, the student started talking about others he wanted to help, and asked for a book on social justice.

"Here is a young guy who has every reason to be cynical," Zuckerberg said, his eyes welling with tears. "He wasn't sure if the country he calls home — the only one he's known — was going to deny him his dream of going to college. But he wasn't feeling sorry for himself. He wasn't even thinking of himself."

If he can do this, Zuckerberg said, "then we owe it to the world to do our part too."

Zuckerberg isn't all talk on this front. He signed the "Giving Pledge" commitment to donate the majority of his money in 2010; five years later, he upped that to 99 percent. Together with his wife, pediatrician Priscilla Chan, he formed the Chan Zuckerberg Initiative, a philanthropic organization focused on advancing science and education.

Zuckerberg follows another famous Harvard dropout, Bill Gates, who spoke before its graduates a decade ago. Apple co-founder Steve Jobs, who dropped out of Reed College in Oregon, gave Stanford's commencement speech in 2005, reminding students to "stay hungry, stay foolish."

In addition to delivering the speech, Zuckerberg received an honorary degree, 12 years after dropping out of Harvard, and was subsequently introduced to graduates as "Dr. Mark Zuckerberg." Others receiving honorary degrees included the actress Judi Dench, the composer John Williams (known for "Star Wars," ''Harry Potter" and many other scores) and Somali human rights activist and physician Hawa Abdi Dhiblawe.

"If I get through this speech today it'll be the first time I actually finish something here at Harvard," Zuckerberg said. He did.

$3B Pledged to End Disease

The usual extravaganza of tech may portend the future of the virtual trade show.
Jan 11th, 2021
Follow Us
Most Recent