The megarocket has been delayed until 2019 because of technical challenges. 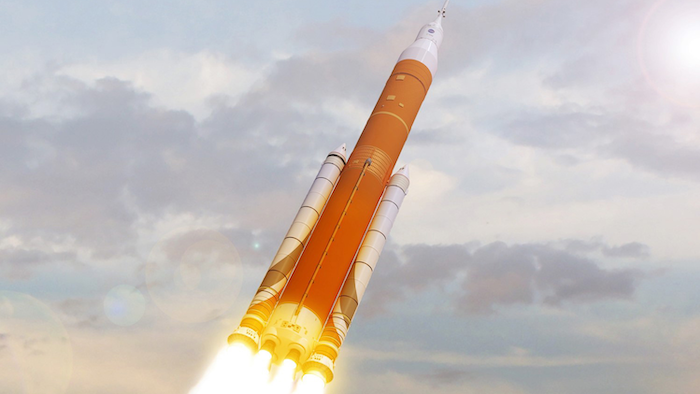 This undated image made available by NASA shows an artist's rendering of the Space Launch System. Still in development, the super-sized rocket is meant to eventually send astronauts to Mars. On Friday, May 12, 2017, NASA said its 2019 test flight will fly without a crew.
NASA via AP

In February at the request of the White House, NASA began studying the possibility of putting a crew on the first flight. After reviewing the costs and risks, the space agency decided against it. The White House took part in the decision, said NASA's Acting Administrator Robert Lightfoot.

Still in development, the super-sized Space Launch System rocket is meant to eventually send astronauts to Mars. The first launch had been targeted for next year, but now won't happen until 2019 when NASA will send an unoccupied Orion capsule to the vicinity of the moon for a three-week trial run.

The second flight will have astronauts on board. It is scheduled for 2021, but will almost certainly be later because of all the delays with the first flight.

It would have cost a lot more money and time to add life-support systems and other human-required equipment for the test flight, said Bill Gerstenmaier, head of NASA's human explorations and operations.

"The best plan we have is actually the plan we're on right now," he said.

The test flight can be more dynamic, as NASA calls it, without a crew, and the lessons learned can help advance the next mission when people finally are on board.

Lightfoot said it would have been technically feasible to add a crew, given more funding, but decided to stay the course.

It would have cost an extra $600 million to $900 million to outfit the system for astronauts on the initial flight, Gerstenmaier said.

Earlier this week, NASA reported that a section of test hardware was damaged during manufacturing in New Orleans. No one was injured in the May 3 mishap. Technicians were lowering the dome for the bottom of a liquid oxygen tank, when the dome ended up ramming into a support structure. NASA is investigating.

Gerstenmaier called it "an unfortunate event" but said it shouldn't affect the schedule much.

Late last month, the U.S. Government Accountability Office warned that a delay was likely for the first SLS flight, crew or not. The current exploration effort will cost nearly $24 billion by the end of fiscal 2018, the GAO reported.

Lightfoot acknowledged that he and others are frustrated by the technical challenges that have slowed down the program. The agency is aiming for a sustainable program within the available resources, he said, not just a single-objective mission.

The Apollo moon program of the 1960s and early 1970s represented a sprint to a single destination, Gerstenmaier noted. The SLS rocket is meant to support flights to not only the moon and Mars, but the moons of Mars and even farther into the solar system, with potential commercial activity as well.

The megarocket represents a robust foundation for ultimately moving human presence out into the solar system, Gerstenmaier said.

"That's a grander vision in a way than just moving people to the moon for the first time, although that was a very special moment and a very special challenge for those teams moving forward. But we're building off of that legacy now to move in a more sustained manner," he said.

Earlier this year, SpaceX announced a bold mission to send two paying passengers on a flight around the moon in 2018. SpaceX chief Elon Musk also aims to colonize Mars.

"I've been saying it for a while. This is an 'and' proposition, this is not an 'or,'" Lightfoot said. "If you look at what we're trying to do, it's going to take really all of us, frankly, to get this done."