China is believed to be planning to build at least two and possibly as many as four additional carriers. 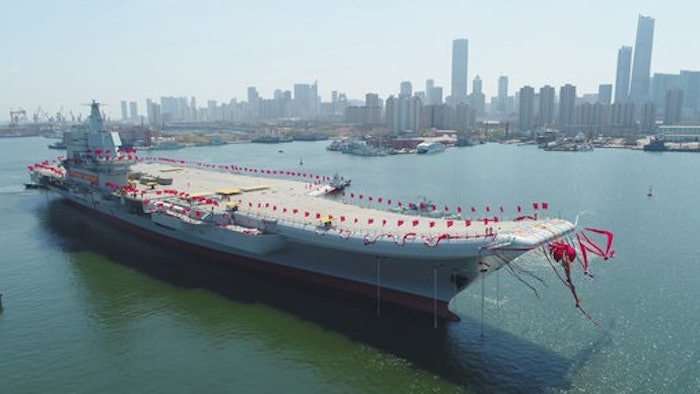 In this photo released by China's Xinhua News Agency, a newly-built aircraft carrier is transferred from dry dock into the water at a launch ceremony at a shipyard in Dalian in northeastern China's Liaoning Province, Wednesday, April 26, 2017. China launched its first aircraft carrier built entirely on its own on Wednesday, in a demonstration of the growing technical sophistication of its defense industries and determination to safeguard its maritime territorial claims and crucial trade routes.
Li Gang/Xinhua via AP

BEIJING (AP) — China has launched its first aircraft carrier built entirely on its own, in a demonstration of the growing technical sophistication of its defense industries and determination to safeguard its maritime territorial claims and crucial trade routes.

The 50,000-ton carrier was towed from its dockyard just after 9 a.m. Wednesday following a ceremony in the northern port city of Dalian, where its predecessor, the Soviet-built Liaoning, underwent extensive refurbishing before being commissioned in 2012, the Ministry of National Defense said.

Development of the new carrier began in 2013 and construction in late 2015. It's expected to be formally commissioned sometime before 2020, after sea trials and the arrival of its full air complement.

The carrier program is a key part of China's naval expansion at a time when it is looking to beef-up its regional military influence to match its economic might. While China says it maintains a defensive military policy, its ambitions are rattling some neighbors who see Beijing as fueling already enflamed tensions in the region.

Chinese naval strategists see the carrier program not only as a means to protect their country's maritime interests, but also to have "naval power commensurate with China's international status, to impress both external and domestic audiences," said Michael Chase, an expert on the Chinese military at U.S. think tank the RAND Corporation.

The new carrier "is likely to be seen as further evidence of China's desire to become the most powerful and influential country in the region," he said. That will be especially worrying to Indian security analysts who are already concerned about Beijing's ambitions in the Indian Ocean, he said.

India, along with Japan and Taiwan which also view Chinese carriers as threats, will likely respond by building new submarines and anti-ship missiles, said Ian Easton, a research Fellow at The Project 2049 Institute in Arlington, Virginia.

China's "expansionist behavior in the South China Sea and its aggressive efforts to undermine the security of Taiwan and Japan, in particular, have translated into a situation where few countries now trust that Beijing has benign motives," Easton said.

"The purpose to develop national defense forces including the navy is to safeguard our national sovereignty, security and development interests, as well as the peace of the world," Geng told reporters Wednesday at a daily news conference.

China has offered little information about the roles it expects its carriers to play, although its planning appears to be evolving as it gains more experience. The Liaoning was initially touted mainly as an experimental and training platform, but in December was declared to be combat-ready and has taken part in live-firing exercises in the South China Sea, where tensions have risen over China's construction of man-made islands complete with airstrips and military structures.

Earlier this year the Liaoning sailed through the Taiwan Strait, which was seen as a message to Taiwan, which China claims as its own territory to be brought under control by force if necessary.

Reports of the launch said a bottle of champagne was broken across the ship's bow and other craft in the port sounded their horns in celebration.

Like the 60,000-ton Liaoning, which was purchased from the Ukraine, the new carrier is based on the Soviet Kuznetsov class design, with a ski jump-style deck for taking off and a conventional oil-fueled steam turbine power plant. That limits the weight of the payloads its planes can carry, its speed and the amount of time it can spend at sea relative to American nuclear-powered carriers.

The main hull of the new carrier has been completed and its power supply put into place. Next up are mooring tests and the debugging of its electronic systems, the Defense Ministry said.

China is believed to be planning to build at least two and possibly as many as four additional carriers, with one of them, the Type 002, reported to be already under construction at a shipyard outside Shanghai. They are expected to be closer in size to the U.S. Navy's nuclear-powered 100,000-ton Nimitz class ships, with flat flight decks and catapults to allow planes to launch with more bombs and fuel aboard.

According to Chinese reports, the new, as yet unnamed, carrier will carry 24 Shenyang J-15 fighters, based on the Russian Sukhoi Su-33, along with 12 helicopters for anti-submarine warfare, airborne early warning and rescue operations. That compares to 85-90 fixed wing aircraft and helicopters carried by a Nimitz-class carrier.

As China expands its navy, it is projected to have a total of 265-273 warships, submarines and logistics vessels by 2020, according to the Washington, D.C.-based Center for Naval Analysis. That compares with 275 deployable battle force ships presently in the U.S. Navy, China's primary rival in the Asia Pacific.