Charging stations are often few and far between in rural areas. 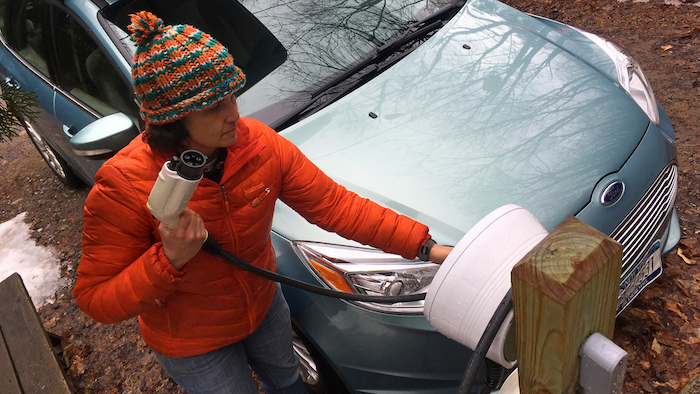 In this Thursday, April 6, 2017 photo, Sunita Halasz shows how she charges her electric car at her home in Saranac Lake, N.Y. Halasz has tips for "driving electric" along the lonely New York Adirondack Mountains roads: learn where the charging stations are, bring food and books for the kids during three-hour recharges, use the defroster in 10-second bursts since it sucks battery life, and have a backup plan.
AP Photo/Michael Hill

And have a backup plan.

"When we really go anywhere, I have a whole list of phone numbers of friends who live all over the Adirondacks," Halasz said during a charging stop. "So that at a moment's notice I can call somebody and be like, 'Hi, I'm going to pull into your driveway. And do you have an outdoor electrical outlet?'"

There are more than 18,000 electric car charging stations in the United States, and the number of outlets at those stations has more than tripled over five years to about 48,000, according to federal data. But they're often few and far between in rural areas. That can leave electric vehicle pioneers in the backcountry with chronic "range anxiety," the fear that their batteries will run out and leave them stranded.

Halasz counters that with careful strategizing before she and her husband take their fully electric Ford Focus on trips over its 75-mile (120-kilometer) range. On family trips to Burlington, Vermont, which is at the edge of that range, they know where they will charge and how they will keep their two sons occupied for the extra hours. The 1,300-foot (396-meter) descent down the mountainsides helps them recapture kinetic energy when they brake, but the trip back up can be a battery killer, especially on cold days.

"I really think we are some of the most extreme EV drivers in the entire United States, living in the Adirondacks, because of all of our ups and or downs and our very cold temperatures," Halasz said.

More than 600,000 electric vehicles are on the road in the U.S. and Canada (including models with gas engines), according to the ChargePoint network. Charging stations are unevenly distributed, with concentrations in California and populous portions of the East Coast. But backcountry electric vehicle drives are getting easier every year with more stations and better batteries.

Silke Sommerfeld and Rolf Oetter, a retired couple from British Columbia's Vancouver Island, demonstrated that with a just-completed 21,000-mile (33794-kilometer) trip around North America in their Tesla Model X. The luxury car has a listed range of 295 miles (474 kilometers), much farther than most electric cars on the road.

Towing a camper that reduced their range, they spent months traveling east across Canada, down to Florida, west to California and back home to the Pacific Northwest. They relied on Tesla's infrastructure of "Supercharger" stations that can power a vehicle in less than an hour. They also used campgrounds for charging in remote stretches, like between Calgary and Toronto.

"We had a few nail-biters, mainly in Canada, not so much in the U.S.," Sommerfeld said. "But we always made it with at least one kilometer range left."

While the Tesla Model X can cost more than $100,000, longer ranges are also becoming available in more affordable models, such as the 200-mile (321-kilometer) Chevrolet Bolt, which runs about $30,000, after a government tax credit.

"The most important thing we can do to contribute to the EV ecosystem is to deliver on a really compelling vehicle for consumers. And we've done that," said Chevy spokesman Fred Ligouri.

But for many electric vehicle drivers, the issue is not miles, but hours.

It can take three hours to fully charge a car on the common "level 2" charger, which is like a clothes dryer outlet. For Art Weaver and his wife, that means budgeting two to three hours each way for charging his Nissan Leaf on 100-mile (160-kilometer) trips from their home in New York's Finger Lakes region to Rochester.

"Everyone thinks it's a big deal — that you're inevitably going to run out of electric fuel. It's not true," said Weaver, who lives near Ithaca. "It's just that it can't be a no-brainer activity anymore like finding a fossil fuel service station."

For electric enthusiasts, extra effort is more than balanced by the carbon-free country drives.

Pete Nelson, of the Adirondack town of Keene, charges his car at home with the help of solar panels, a sort of carbon-free double play. He is so pleased with his electric and gas Chevy Volt that he just went all-in with an electric-only Bolt.

"I love driving down these roads," he said. "And the quiet and the lack of emissions is Zen-like."