Prices for these cars range from hundreds of thousands of dollars to the millions. 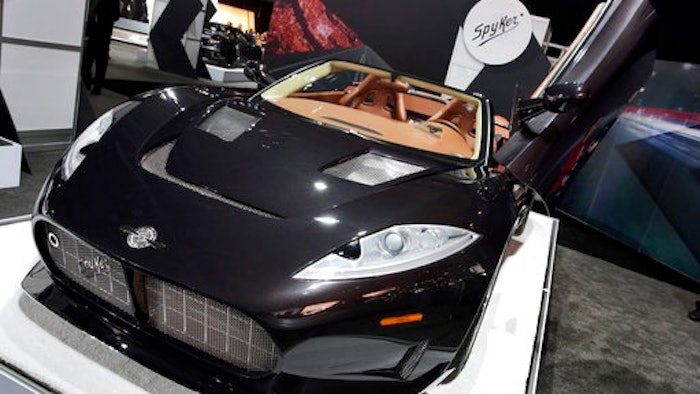 The Spyker C8 Preliator is shown during a media preview at the New York International Auto Show, at the Jacob Javits Center in New York, Thursday, April 13, 2017.
AP Photo/Richard Drew

NEW YORK (AP) — Thursday at the New York International Auto Show was a day for automakers that sell to the wealthiest of car buyers to show their high-powered stuff. Prices for these cars range from hundreds of thousands of dollars to the millions. A potential competitor for Tesla also made its auto show debut with an electric sedan.

There are unique exotic cars, and there's boutique unique. Two super-high-end boutique automakers showed off new vehicles Thursday designed for 1 percenters. Koenigsegg Automotive of Sweden unveiled the Agera RS1, a hand-built car made partly of carbon fiber with a twin-turbo 5-Liter V8 that puts out up to 1,360 horsepower. It can go from zero to 62 miles per hour (100 kilometers per hour) in 2.8 seconds and costs north of $2 million. The company expects to build 20 cars this year. Dutch automaker Spyker Ltd. showed its $429,000 C8 Preliator Spyder, a convertible with a carbon-fiber body powered by a 600 horsepower V8 — made by Koenigsegg — with a six-speed manual transmission. The company will build only 100. CEO Victor Muller says there's been a resurgence in manual transmissions in exotic cars. The Preliator goes from 0 to 62 in 3.6 seconds.

Potential Tesla rival Lucid Motors showed off the all-electric Air sedan. It will have up to 400 miles of range and 1,000 horsepower when it goes on sale in 2019. That's more range and power than Tesla's Model S. Lucid is taking refundable reservations for the Air, which it says will start at $52,500 after a $7,500 federal tax credit. The company isn't saying how many reservations it has received since it unveiled the car in mid-December. Ten-year-old Lucid is based in Menlo Park, California. It began as a battery company but started developing vehicles in 2014. It is currently led by Peter Rawlinson, who was the lead engineer of the Tesla Model S before coming to Lucid. Lucid plans to make the Air at a factory it's building in Casa Grande, Arizona. The company wants to make up to 130,000 vehicles per year by 2022.