Once a Google ally, Uber has emerged as a rival in the self-driving car market. 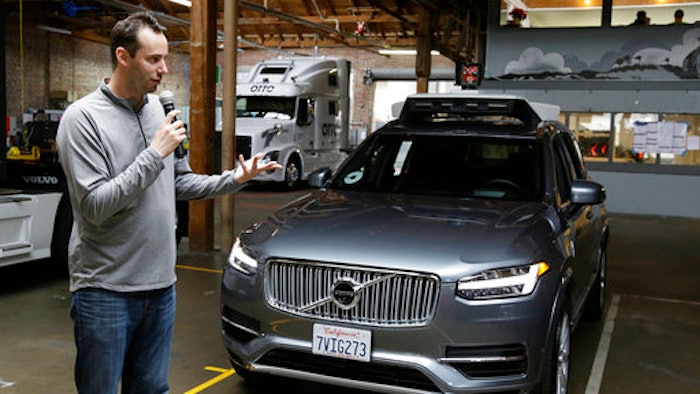 SAN FRANCISCO (AP) — Uber is scoffing at claims that its expansion into self-driving cars hinges on trade secrets stolen from a Google spinoff, arguing that its ride-hailing service has been working on potentially superior technology.

The legal defense, presented in documents filed Friday in San Francisco federal court, marks Uber's first detailed response to explosive allegations that its self-driving cars rely on crucial technology designed by Waymo. That company was created from an autonomous-vehicle project started at Google eight years ago.

Once a Google ally, Uber emerged as a rival in the self-driving car market in early 2015 when it began developing its own fleet of autonomous vehicles.

Now, Waymo is trying to thwart that effort by persuading U.S. District Judge William Alsup to block Uber's self-car driving expansion on the grounds that it hinges on a high-tech heist. The case's outcome could alter the race to build self-driving cars that may transform transportation, reduce traffic deaths and launch a huge new industry.

But Uber is now presenting evidence that it began working on technology dramatically different from Waymo's more than a year before buying Otto.

In sworn declarations and diagrams, Uber argued that its engineers are working on a more sophisticated form of LiDAR than Waymo's. Among other things, Uber says its LiDAR uses four lenses for transmitting and receiving laser lights as opposed to the single lens in Waymo's version.

What's more, Uber says its custom-designed LiDAR system hasn't even been installed on the self-driving cars that it has been testing in Pittsburgh, Arizona and San Francisco. Instead, the company says it has been relying on LiDAR systems built by other vendors.

Much of the information contained in Friday's filing was redacted to protect confidential business plans and secret technology.

Uber may have its work cut out to sway Alsup, who has said in previous court hearings that Waymo has presented some of the strongest evidence he has seen in his judicial career. A hearing on Waymo's request for an injunction against Uber is scheduled for May 3.

Although Waymo isn't suing him in this case, Levandowski will play a central role in how the lawsuit unfolds.

Levandowski helped establish Google as an early leader in self-driving cars, earning him more than $120 million in incentive pay, according to information inadvertently revealed in court papers earlier this week.

After buying Otto, Uber put Levandowski in charge of Uber's self-driving project, a job that has been imperiled by this lawsuit.

Alsup has warned that he may issue an order barring Levandowski from involvement in Uber's self-driving car division if he sides with Waymo.

Uber says it hasn't found any evidence of ever possessing any of the files that Levandowski stands accused of stealing. Levandowski, meanwhile, has asserted his Fifth Amendment rights to protect himself if criminal charges are filed against him.