The recent crash was a stark reminder of the challenges surrounding autonomous vehicles. 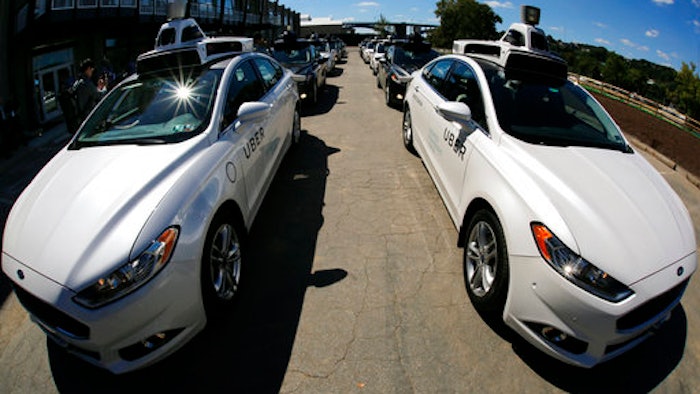 PHOENIX (AP) — A crash that caused an Uber self-driving SUV to flip onto its side in a Phoenix suburb serves as a stark reminder of the challenges surrounding autonomous vehicles in Arizona, a state that has gone all-in to entice the company by promising minimal government regulation.

Friday night's crash was blamed on the driver of an oncoming SUV that turned left in front of the Uber vehicle carrying two test drivers and no passengers. There were no serious injuries and the driver of the other car was cited for a moving violation. But images of Uber's Volvo SUV rolled onto its side reverberated heavily on social media.

Uber responded by briefly suspending its self-driving cars in its three testing locations — Arizona, San Francisco and Pittsburgh — as it investigated the accident.

Uber's self-driving car program is rolling out amid questions about how much government regulation it should endure on issues such as accidents, insurance and reporting instances in which the person behind the wheel in test cars needs to take control of the vehicle.

The San Francisco-based startup endured a shaky December rollout in California — including running red lights — that culminated in a standoff between Uber and state regulators who wanted more transparency and reporting.

Arizona Gov. Doug Ducey seized the opportunity and used lax regulations to entice Uber, which decided to ship more than a dozen SUVs to metro Phoenix.

"California may not want you, but Arizona does," said Ducey, who took the first ride as a passenger in Uber's self-driving cars last month.

Uber spokeswoman Taylor Patterson said the company is operating more than a dozen of the 21 vehicles it has registered in Arizona. Some pick up passengers.

In Arizona, companies such as Uber only need to carry minimum liability insurance policies to operate self-driving cars. They are not required to track crashes like the one that occurred in Tempe on Friday or report any information to the state.

That means that self-driving test cars are essentially treated like all other cars on the road.

Ducey spokesman Daniel Scarpinato said in a March 3 interview that the cars are safe and there is sufficient oversight under existing automobile rules.

"There's a driver in the car," he said. "The state oversight is: There are not cars without drivers in them."

John Simpson of the California-based advocacy group Consumer Watchdog said Ducey has abandoned his responsibility to protect the public by buying into the hype surrounding Uber.

"It's a fundamental responsibility of a governor of a state to make sure that when companies are using the state's public highways as their own private laboratories, that there is some obligation to protect public safety," Simpson said. "There are no rules in Arizona."

In March, Uber obtained permits for two of its Volvo SUVS to again hit the streets in San Francisco.

California's rules for autonomous vehicles require a $5 million insurance policy, and the companies must reports accidents to the state within 10 days and release an annual tally documenting how many times test drivers had to take over.

Also, unlike in Arizona and Pennsylvania, passengers are not allowed to ride in autonomous vehicles in California.

Ducey doesn't believe self-driving car testing needs extra regulations because drivers can take over if something goes wrong, but his office said Monday after the accident that "public safety remains our top priority and we will continue to monitor the situation closely."

Kevin Biesty, deputy director for policy for the Arizona Department of Transportation, said the state could set up a system to monitor local police accident reports involving self-driving cars but chose not to do so.

"At this point we don't see an issue if the vehicles are being operated safely — they'll be responsible for whatever issues arise, just like any driver," Biesty said.

Uber's SUVs have been tooling around Phoenix and Tempe for more than three months, and police in both cities said they knew of no accidents before Friday.

Other companies testing self-driving cars in Arizona include Waymo, a Google spinoff company, and General Motors. Intel has a fleet of self-driving cars that are being tested, although they are not used in autonomous mode on city streets, company spokeswoman Danielle Mann said.

There's no Arizona state data showing how many accidents the cars may have been involved in or caused.

Police in suburban Chandler said the Google cars have been in at least four wrecks over the past three years. None of the GM cars have been involved in accidents, said Kevin Kelly, the company's spokesman for advanced technology projects.

Uber's recent crash comes amid a series of public-relations woes at the company, including an upheaval of its executive ranks and allegations that it routinely ignores sexual harassment.

The New York Times also revealed the company's use of the "Greyball" program that helped Uber identify law enforcement agents who may be trying to catch it operating illegally in some places. The company's chief security officer, Joe Sullivan, subsequently promised Uber would no longer use the program.