The tiny redox flow battery could be the future of computer chip stacks. 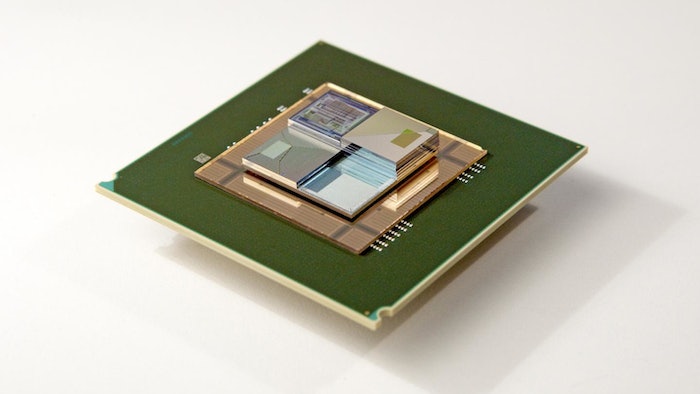 Three-dimensional chip stacks could be used in computers in the future. Integrated microscale flow batteries could both power and cool them.
IBM Research Zurich

This means that future computer chip stacks -- in which individual chips are stacked like pancakes to save space and energy -- could be supplied with electrical power and cooled at the same time by such integrated flow batteries.

In a flow battery, an electrochemical reaction is used to produce electricity out of two liquid electrolytes, which are pumped to the battery cell from outside via a closed electrolyte loop.

"The chips are effectively operated with a liquid fuel and produce their own electricity," says Dimos Poulikakos, Professor of Thermodynamics at ETH Zurich. As the scientists use two liquids that are known to be suitable both as flow-battery electrolytes and as a medium to also effect cooling, excess heat can also be dissipated from the chip stack via the same circuit.

The battery built by the scientists is only around 1.5 millimetres thick. The idea would be to assemble chip stacks layer by layer: a computer chip, then a thin battery micro-cell that supplies the chip with electricity and cools it, followed by the next computer chip and so on.

Previous flow batteries (see box) are usually large scale and used mainly in stationary energy storage applications, for instance in combination with wind farms and solar power plants, where they temporarily store the energy produced there so it can be used at a later time.

"We are the first scientists to build such a small flow battery so as to combine energy supply and cooling," says Julian Marschewski, a doctoral student in Poulikakos' group.

The output of the new micro-battery also reaches a record-high in terms of its size: 1.4 watts per square centimetre of battery surface. Even if you subtract the power required to pump the liquid electrolytes to the battery, the resulting net power density is still 1 watt per square centimetre.

As the researchers were able to show in an experiment, the electrolyte liquids are actually able to cool a chip. They are even able to dissipate heat amounts many times over what the battery generates as electrical energy (which is converted into heat while the chip is in operation).

According to the scientists, the most serious challenge in constructing the new micro-flow batteries was to build them in such a way that they are supplied with electrolytes as efficiently as possible while at the same time keeping the pumping power as low as possible. "It was important to find the ideal compromise," says Marschewski.

The electrochemical reactions in the battery occur in two thin and porous electrode layers that are separated by a membrane. Marschewski and his colleagues used 3D-printing technology to build a polymer channel system to press the electrolyte liquid into the porous electrode layer as efficiently as possible. The most suitable of the various designs tested proved to be one made of wedge-shaped convergent channels.

The scientists have now provided an initial proof-of-concept for the construction of a small flow battery. Although the power density of the new micro-flow battery is very high, the electricity produced is still not entirely sufficient to operate a computer chip. In order for the flow battery to be used in a chip stack, it must be further optimised by industry partners.

As the scientists point out, the new approach is also interesting for other applications: in lasers, for example, which have to be supplied with energy and cooled; or for solar cells, where the electricity produced could be stored directly in the battery cell and used later when needed.

The system could also keep the operating temperature of the solar cell at the ideal level. In addition, large flow batteries could also be improved with the optimised approach of forcing the electrolyte liquids through the porous electrodes.

"Flow batteries are in principle rechargeable fuel cells," explains ETH doctoral student Julian Marschewski. But while fuel cells can only convert chemical energy into electrical energy, flow batteries can convert into both directions.

For conventional batteries, the more energy they store, the larger and heavier they are. In flow batteries, the electrolyte liquids (i.e. the fuel) can be supplied from outside. One advantage is that the cells of the flow batteries can be designed smaller and lighter. A disadvantage, however, is that flow batteries require a liquid supply system.