The potatoes resist the pathogen that caused the Irish potato famine. 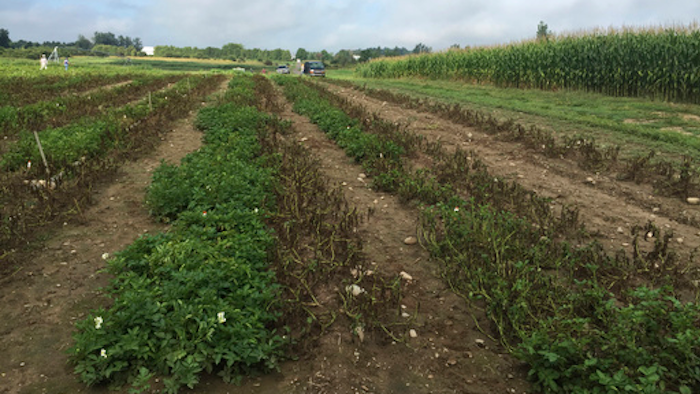 BOISE, Idaho (AP) — Three types of potatoes genetically engineered to resist the pathogen that caused the Irish potato famine are safe for the environment and safe to eat, federal officials announced.

The approval by the U.S. Environmental Protection Agency and Food and Drug Administration late last week gives Idaho-based J.R. Simplot Co. permission to plant the potatoes this spring and sell them in the fall.

The company said the potatoes contain only potato genes and that the resistance to late blight, the disease that caused the Irish potato famine, comes from an Argentine variety of potato that naturally produced a defense.

There is no evidence that genetically modified organisms, known as GMOs, are unsafe to eat, but changing the genetic code of foods presents an ethical issue for some. McDonald's declines to use Simplot's genetically engineered potatoes for its French fries.

The three new varieties of potato — the Russet Burbank, Ranger Russet and Atlantic — have previously been approved by the U.S. Department of Agriculture. They "have the same taste and texture and nutritional qualities" as conventional potatoes, Simplot spokesman Doug Cole said.

The company said they will have reduced bruising and black spots, enhanced storage capacity and a lower amount of a chemical that's a potential carcinogen and is created when potatoes are cooked at high temperatures.

Conventional potatoes can turn a dark color when cooked after they were kept cold for too long, a problem the new varieties reduce, the company said. Simplot also said the enhanced cold storage will likely have significant ramifications for the potato chip industry by reducing trucking costs.

Potatoes are considered the fourth food staple crop in the world behind corn, rice and wheat. Late blight, which rotted entire crops and led to the deaths of about a million Irish in the 1840s, is still a major problem for potato growers, especially in wetter regions.

Fungicides have been used for decades to prevent the blight. Simplot says the genetically engineered potatoes reduce the use of fungicide by half.

The company also notes the potatoes contain no DNA from an unrelated organism.

The Non-GMO Project, which opposes GMOs and verifies non-GMO food and products, said the new potatoes don't qualify as non-GMO.

"There is a growing attempt on the part of biotechnology companies to distance themselves from the consumer rejection of GMOs by claiming that new types of genetic engineering ... are not actually genetic engineering," the Washington state-based group said in a statement.

The most recent federal approvals apply to Simplot's second generation of Innate potatoes. The first generation didn't include protection from late blight or enhanced cold storage.

The first generation has been sold in stores under the White Russet label. Cole said the company hasn't decided how it will market the new Innate potatoes.

It is also working on a third generation that Cole said will have protections against additional strains of late blight.