The C-130Js will be used to support critical peacekeeping and contingency operations.

The first of 14 Lockheed Martin C-130J-30 Super Hercules transports that will be assigned to the U.S. Air Force installation at Yokota Air Base, Japan, departed the Lockheed Martin Aeronautics facility in Greenville, SC, on Feb. 24, 2017.

This marks the first U.S. Air Force combat delivery C-130J-30 to be permanently assigned to the Pacific region.

The C-130J-30s will be flown by 36th Airlift Squadron crews at Yokota, and the new aircraft will recapitalize the unit’s existing C-130H fleet.

The C-130Js will be used to support critical peacekeeping and contingency operations in the Western Pacific region, including cargo delivery, troop transport, airdrop and aeromedical missions. The 36th AS — known as the “Eagle Airlifters” — is one of several flying squadrons under the 374th Airlift Wing.

The C-130J Super Hercules is the current combat delivery C-130 production variant, offering superior performance and new capabilities, with the range and flexibility for every theater of operations and evolving requirements.

The U.S. Air Force operates the largest C-130J fleet in the world and its C-130 crews have been large contributors to the global Super Hercules fleet’s more than 1.5 million flight hours. 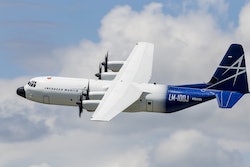 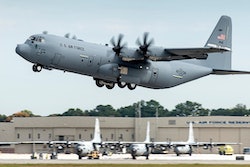