The megarocket is designed to eventually send crews to Mars. 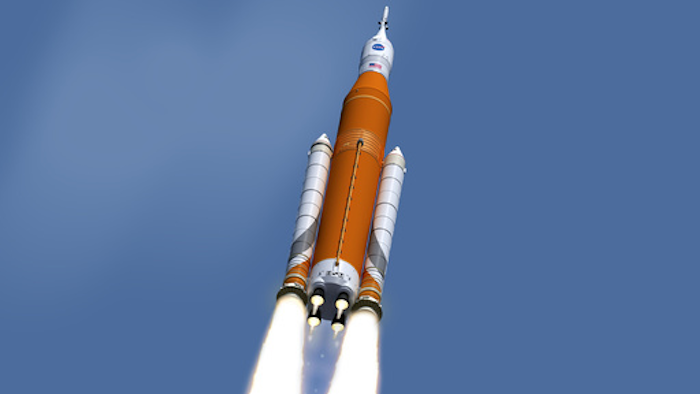 This image made available on Feb. 15, 2017 by NASA shows an artist's concept of the launch of the Space Launch System rocket and Orion capsule. On Friday, Feb. 24, 2017, NASA said it is weighing the risk of adding astronauts to the first flight of its new megarocket.
NASA/Marshall Space Flight Center via AP

CAPE CANAVERAL, Fla. (AP) — NASA is weighing the risk of adding astronauts to the first flight of its new megarocket, designed to eventually send crews to Mars.

The space agency's human exploration chief said Friday that his boss and the Trump administration asked for the feasibility study. The objective is to see what it would take to speed up a manned mission; under the current plan, astronauts wouldn't climb aboard until 2021— at best.

The Space Launch System, known as SLS, will be the most powerful rocket when it flies.

NASA is shooting for an unmanned test flight for late next year. Putting people on board would delay the mission and require extra money. The space agency's William Gerstenmaier said if adding astronauts postpones the first flight beyond 2019, it would probably be better to stick with the original plan.

Under that plan, Gerstenmaier said, nearly three years are needed between an unmanned flight test and a crewed mission to make launch platform changes at Kennedy Space Center.

"We recognize this will be an increased risk" to put astronauts on the initial flight, Gerstenmaier said.

Astronauts are taking part in the study, which will weigh the extra risk against the benefits.

On Thursday, an independent safety panel cautioned that NASA needs a compelling reason to put astronauts on the initial flight, given the risk. The Aerospace Safety Advisory Panel was formed in the wake of the Apollo 1 fire that killed three astronauts in a countdown test 50 years ago last month.

The capsule that will carry the astronauts — NASA's new Orion — already has flown on a space demo. Containing memorabilia and toys but no people, the capsule was launched into an extremely long orbit of Earth in 2014 by a Delta IV rocket, and splashed down into the Pacific.

NASA normally prefers testing rockets without people, although for the inaugural space shuttle flight in 1981, two pilots were on board. A small crew of two also is planned for the 2021 SLS mission, which could fly to the vicinity of the moon.

An inaugural flight with astronauts would grab more attention. But Gerstenmaier said the public aspect won't be taken into consideration.

"There are pros and cons both ways, and it's hard to judge that (public) aspect," he told reporters. "But I look at it more kind of matter-of-factly. What do I gain technically by putting crew on?"

NASA expects to issue its report in about a month.

Robots Set Up Life on Mars