There are still another two decades before NASA aims to land humans on Mars, but now is the time to build robots that will be useful in such hostile environments. 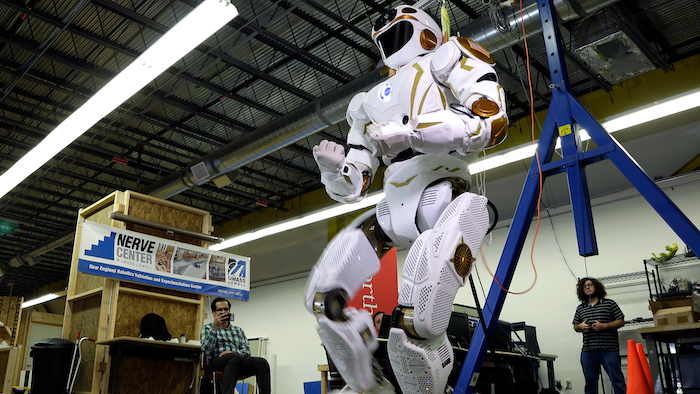 In this May 2, 2016 photo, researchers watch the six-foot-tall, 300-pound Valkyrie robot walk slowly at University of Massachusetts-Lowell's robotics center in Lowell, Mass. "Val," one of four sister robots built by NASA, could be the vanguard for the colonization of Mars by helping to set up a habitat for future human explorers.
AP Photo/Elise Amendola

LOWELL, Mass. (AP) — Four sister robots built by NASA could be pioneers in the colonization of Mars, part of an advance construction team that sets up a habitat for more fragile human explorers. But first they're finding new homes on Earth and engineers have to hone their skills.

The space agency has kept one Valkyrie robot at its birthplace, the Johnson Space Center in Houston. It has loaned three others to universities in Massachusetts and Scotland so professors and students can tinker with the 6-foot-tall, 300-pound humanoids and make them more autonomous.

One of the robots, nicknamed Val, still hasn't quite harmonized its 28 torque-controlled joints and nearly 200 sensors after arriving at a robotics center at the University of Massachusetts-Lowell. Engineering students let the electricity-powered robot down from a harness and tried to let it walk, only to watch as Val's legs awkwardly lurched and locked into a ballet pose.

"That doesn't look good," said Taskin Padir, a professor at Northeastern University, noting Val's $2 million price tag. Northeastern and UMass-Lowell are partnering on a two-year project to improve the robot's software and test its ability to manipulate tools, climb a ladder and perform high-level tasks.

NASA originally designed Valkyrie several years ago to compete in the disaster-relief robotics contest hosted by the U.S. military's Defense Advanced Research Projects Agency, but now it's looking for outside expertise to craft her into a kind of space mechanic. NASA shipped two other Valkyries to the Massachusetts Institute of Technology and the University of Edinburgh in Scotland.

This is not yet the stuff of "The Martian," the Hollywood blockbuster about surviving on the Red Planet. For one thing, the tiny holes that prevent Val from overheating could get clogged up by spiraling Martian dust. But a sturdier exterior will come later.

There are still another two decades before NASA aims to land humans on Mars in the mid-2030s, said Johnson Space Center spokesman Jay Bolden. Now is the time, he said, to build the computer code that will make the robots useful in hostile environments. If not the Valkyries, it will be their descendants serving as the android vanguard that could make human life possible on Mars.

"It needs to be able to communicate back to Earth, very clearly and concisely, what's going on," said Holly Yanco, a computer science professor who directs UMass-Lowell's robotics center and is an expert on human-robot interactions.

A time delay between communications from Earth to Mars means humans won't be able to remotely control robots that will need to build structures and do emergency repair work.

There's a huge step between NASA's robotic rover Curiosity, which landed on Mars in 2012, and the capabilities of a robot such as Valkyrie, said Robert Platt, an assistant professor at Northeastern University who is part of the research team. "The rovers get their instructions uploaded at the beginning of the day," Platt said. "Those instructions amount to, 'Go over there,' or, 'Check out that rock.' It's a completely different ballgame when the job for the day is to assemble a couple of habitats."

A number of technological advancements, from faster computers to better machine-learning algorithms, will soon make it possible for a robot such as Valkyrie to perform such tasks, Platt said.

"Robotics has been making tremendous strides in the past five years. Drones, autonomous vehicles," he said. "It's one of those situations where you work on the same problem for decades and decades, and something finally starts to happen. Maybe this is that time."

How AI and Automation Benefit the Supply Chain

Enterprise Resilience in the Wake of COVID-19

Manufacturing has shown incredible adaptability when it comes to production – now it must apply that to its most important asset.
Sep 8th, 2020

There are four main areas where ERP and digital transformation can stimulate operational efficiencies and business agility.
Sep 4th, 2020

PROFINET in the Age of Edge Computing

The average plant may be 30 to 50 years old with only isolated pockets of automation limited to PLCs and SCADA systems.
Sep 2nd, 2020

To make it happen, the company built a permanent overhead rail system in the shop to simulate a moving production line.
Sep 1st, 2020

The Right Bot for You

A digital assistant for every worker is certainly cool, but in today’s artificial intelligence age, selecting the wrong automation tool can be disastrous.
Aug 25th, 2020

Sounds helped a robot differentiate between objects, such as a metal screwdriver and a metal wrench.
Aug 14th, 2020

Digital transformation in automation and packaging lines can simplify the re-purposing of assets to accommodate the only constant in business - change.
Aug 7th, 2020

"Our security products kept us in constant communication and have proven that ... we can do this. We have experienced zero downtime."
Aug 12th, 2020
Follow Us
Most Recent

China to 'Avoid' Frozen Foods from Countries with Severe COVID-19