X-plane to pave way for supersonic flight over land in the not too distant future. 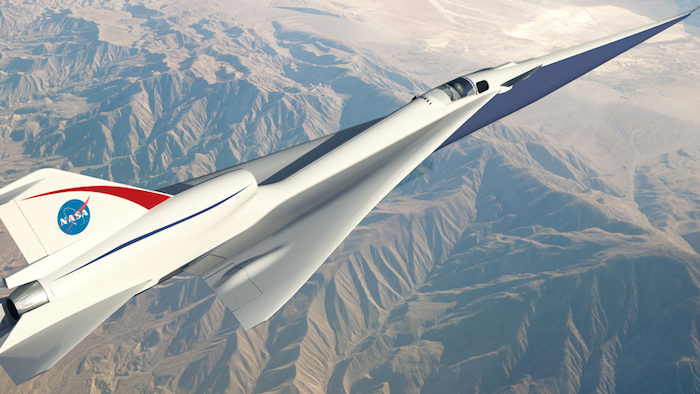 QueSST is designed to fly at Mach 1.4, 55,000 feet above the ground. The aircraft is shaped to separate the shocks and expansions associated with supersonic flight to reduce the volume of the shaped signature.
Lockheed Martin

The agency is testing a nine percent scale model of Lockheed Martin’s X-plane design in Glenn’s 8’ x 6’ Supersonic Wind Tunnel. During the next eight weeks, engineers will expose the model to wind speeds ranging from approximately 150 to 950 mph (Mach 0.3 to Mach 1.6) to understand the aerodynamics of the X-plane design as well as aspects of the propulsion system.

NASA expects the QueSST X-plane to pave the way for supersonic flight over land in the not too distant future.

“We’ll be measuring the lift, drag and side forces on the model at different angles to verify that it performs as expected,” said aerospace engineer Ray Castner, who leads propulsion testing for NASA’s QueSST effort. “We also want make sure the air flows smoothly into the engine under all operating conditions.”

The Glenn wind tunnel is uniquely suited for the test because of its size and ability to create a wide range of wind speeds.

“We need to see how the design performs from just after takeoff, up to cruising at supersonic speed, back to the start of the landing approach,” said David Stark, the facility manager. “The 8’ x 6’ supersonic wind tunnel allows us to test that sweet spot range of speeds all in one wind tunnel.”

Recent research has shown it is possible for a supersonic airplane to be shaped in such a way that the shock waves it forms when flying faster than the speed of sound can generate a sound at ground level so quiet it will hardly will be noticed by the public, if at all.

“Our unique aircraft design is shaped to separate the shocks and expansions associated with supersonic flight, dramatically reducing the aircraft’s loudness,” said Peter Iosifidis, QueSST program manager at Lockheed Martin Skunk Works. “Our design reduces the airplane’s noise signature to more of a ‘heartbeat’ instead of the traditional sonic boom that’s associated with current supersonic aircraft in flight today.”

According to Dave Richwine, NASA’s QueSST preliminary design project manager, “This test is an important step along the path to the development of an X-plane that will be a key capability for the collection of community response data required to change the rules for supersonic overland flight.”

NASA awarded Lockheed Martin a contract in February 2016 for the preliminary design of a supersonic X-plane flight demonstrator. This design phase has matured the details of the aircraft shape, performance and flight systems. Wind tunnel testing and analysis is expected to continue until mid-2017. Assuming funding is approved, the agency expects to compete and award another contract for the final design, fabrication, and testing of the low-boom flight demonstration aircraft.

The QueSST design is one of a series of X-planes envisioned in NASA's New Aviation Horizons (NAH) initiative, which aims to reduce fuel use, emissions and noise through innovations in aircraft design that depart from the conventional tube-and-wing aircraft shape. The design and build phases for the NAH aircraft will be staggered over several years with the low boom flight demonstrator starting its flight campaign around 2020, with other NAH X-planes following in subsequent years, depending on funding.

UNLV to Work With NASA, Lockheed