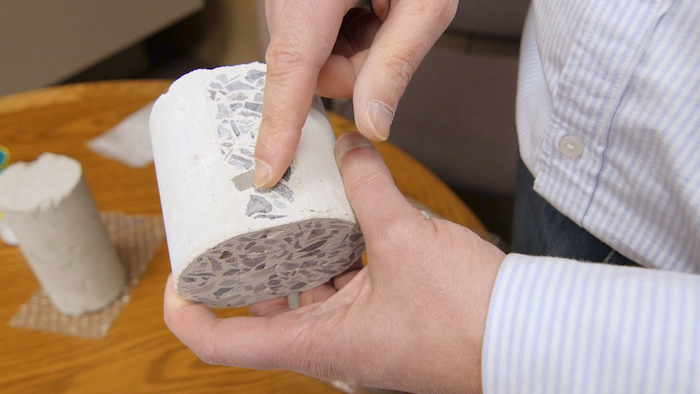 In the future, wide-ranging composite materials are expected to be stronger, lighter, cheaper and greener for our planet, thanks to an invention by Rutgers’ Richard E. Riman.

Nine years ago, Riman, a distinguished professor in the Department of Materials Science and Engineering in the School of Engineering, invented an energy-efficient technology that harnesses largely low-temperature, water-based reactions. As a result, he and his team can make things in water that previously were made at temperatures well above those required to thermally decompose plastics.

So far, the revolutionary technology has been used to make more than 30 different materials, including concrete that stores carbon dioxide, the prime greenhouse gas linked to climate change. Other materials include multiple families of composites that incorporate a wide range of metals, polymers and ceramics whose behavior can be processed to resemble wood, bone, seashells and even steel.

A promising option is creating materials for lightweight automobiles, said Riman, who holds dozens of patents and was recently named a fellow of the National Academy of Inventors. The materials could be used for engine, interior and exterior applications. Other materials could perform advanced electronic, optical and magnetic functions that replace mechanical ones.

“Ultimately, what we’d like to be able to do is create a ‘Materials Valley’ here, where this technology can start one company after another, small, medium and large businesses,” Riman said. “It’s a foundational or platform technology for solidifying materials that contain ceramics, among other things. They can be pure ceramics, ceramics and metals, ceramics and polymers – a really wide range of composites.”

Riman, who has taught for 30 years in the Department of Materials Science and Engineering, focuses on making ceramic materials under sustainable conditions. That means low energy with a low carbon dioxide footprint.

His patented technology creates bonds between materials at low temperatures. It’s called reactive hydrothermal liquid-phase densification (rHLPD), also known as low-temperature solidification. And it’s been used to make a wide range of ceramic composite materials at Rutgers, according to an article published last summer in the Journal of the American Ceramic Society.

“Typically, we don’t go any higher than 240 degrees centigrade (464 degrees Fahrenheit) to make the composite materials,” Riman said. “A lot of these processes are done even at room temperature.”

Riman, who earned a bachelor’s degree in ceramic engineering at Rutgers and a doctorate in materials science and engineering at the Massachusetts Institute of Technology, invented the technology after studying how engineers densified Alaskan fields of snow and ice to create airplane landing strips.

“I looked at how shellfish make ceramics at low-temperature, like carbonate crystals, and then looked at what people can do with water to make landing strips in Alaska and I said we should be able to do this with ceramics, but use a low-temperature chemical process that involves water,” he said.

Riman came up with the idea decades ago but didn’t launch the technology until climate change became a bigger issue. “When it became important to investors to see green technology developed to address carbon emissions in the world, I decided it was time to take this technology commercial,” he said.

So he founded Solidia Technologies  in Piscataway, New Jersey, in 2008. It’s a startup company marketing improved, eco-friendly cement and concrete for construction and infrastructure. Concrete is a $1 trillion market, Riman noted.

“The first thing we did was show that we could make a material that costs the same as conventional Portland cement,” he said. “We developed processing technology that allows you to drop the technology right into the conventional world of concrete and cement without having to make major capital expenditures typically encountered when a technology is disruptive to the marketplace. We plan to do the same thing in the advanced materials business.”

Solidia Concrete products have superior strength and durability. They, combined with Solidia Cement can reduce the carbon footprint of cement and concrete by up to 70 percent and can save as much as 528.3 billion gallons a year, according to Solidia Technologies.

“When you can develop technologies that are safe and easy to use, it’s a game changer – and that’s just one of the many areas that we’re interested in pursuing,” Riman said.