Smog Pushes China to Innovate for the World

With no quick fix available, many residents develop their own solutions. 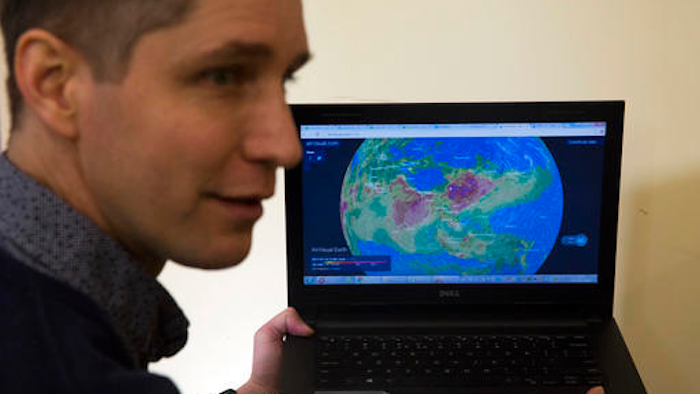 In this Jan. 13, 2017 photo, Yann Boquillod, founder of start-up AirVisual, talks about a 3-D real-time global map of air pollution at the Ivy Bilingual School in Beijing. There is no quick fix to the Chinese capital’s dirty skies, so Beijing residents are finding ways to cope with and adapt to the air pollution. Bodin said he thinks every house should have an air filtering and ventilation system pre-installed. Boquillod wanted to know what kind of air his five children were breathing at home, so he developed a portable air quality monitor.
AP Photo/Ng Han Guan

BEIJING (AP) — Beijing residents concerned about breathing the capital's thick gray air are adapting, inventing and even creating businesses to protect the health of their families and others. Some of their efforts could help people around the world.

Already this year, the smog-shrouded capital has suffered particularly hazardous bouts of pollution caused mainly by coal burning and vehicle emissions. Like other Chinese cities, Beijing is trying to tackle the problem: City authorities say they will spend $2.7 billion this year to help replace coal with natural gas, close heavily polluting factories and take older vehicles off the road.

Official figures show improvement since 2013, but Beijing has a long way to go. With no quick fix available, many residents developing their own partial solutions. Here are some of their ideas:

For the last four years, Zou Yi has diligently captured the sky's change in colors from the window of his central Beijing apartment, where he can — usually — see the landmark Beijing Television tower. The background in his photos runs from dirty brown to deep gray, interspersed with one or more days of cobalt blue. On the worst days, nearby buildings can't be seen.

A 10-day period of particularly heavy pollution inspired his project. The government had just started publishing data on levels of PM2.5 — tiny particulate matter that can clog lungs — and a taboo on state media's discussion of the sensitive topic had just been lifted.

"I couldn't go out, I couldn't open windows, I couldn't see the building next to me because the smog was so bad," he said.

Zou shared the photos on the Twitter-like Sina Weibo and the smartphone messaging app WeChat. He found his friends had similar feelings of frustration and recruited his building manager to take the pictures when he was out of town.

"They wanted me to share a photo with them every day, so I did it every day, every month," said Zou, 50. Hundreds of thousands of people have seen his photos on social media.

What started as a way to complain has morphed into his full-time passion. This month, Zou set up the non-governmental organization BeijingAirNow to work with scientists on technology to read pollution levels from around the world by analyzing the tint in the images rather than using expensive monitoring equipment to collect air particles. He says he is handing over more than 300,000 photos for computer analysis.

Wang Jiang, 42, and her family had eight air purifiers at home, yet found that the indoor air quality was still not good enough on heavy pollution days. Then they decided to take their efforts up a notch.

But sealing windows and doors and turning on the purifiers caused carbon dioxide levels to spike, leaving Wang to wake up last year with headaches while pregnant with her second daughter.

So now they have installed a $5,000 industrial-grade filtration system that sucks in outdoor air, cleans it via three filters and distributes it around the house through newly fitted pipes. They filled in vents from their building's central heating system and installed their own.

While some might find that extreme, it's an increasingly popular solution. Filter manufacturer Yuanda says their customers range from the ruling Communist Party's Central Committee to homes and about 1,000 kindergartens and schools.

A marketing representative, who only gave his surname, Hu, said their purifying systems often go out of stock. "If you order one today, it won't get installed until March," Hu said.

Now Wang, a coffee importer, can exercise on a living room treadmill when pollution is bad without worrying about her health.

Her husband, Frenchman Ludovic Bodin, 38, said he thinks every house should have an air filtering and ventilation system pre-installed. "At least if you cannot secure outdoors because it takes time ... at least try to secure the house inside," he said.

Frenchman and long-term Beijing resident Yann Boquillod wanted to know what kind of air his five children were breathing at home, so he developed a portable air quality monitor. It also tells users when carbon dioxide levels are high from sealing rooms too tightly, and advises that they should open windows for 10 minutes even if there is pollution outside.

Boquillod's start-up, AirVisual, also provides air pollution readings around the world using data from more than 10,000 monitoring sources, both public and private. The company shares a 3-D real-time global map of air pollution and weather patterns on its website.

On the website Wednesday, easily the largest mass of unhealthy levels of PM2.5 pollution was a swath that covered much of eastern China, from Beijing in the north to Kunming in the south.

Boquillod, 39, sees this as an educational tool and means of self-protection. He consults with schools, hospitals and offices to test air quality and find gaps in door and window frames that could allow pollution in.

"The most important thing is to first start by monitoring the air quality and from that we can take the right decisions on what kind of air purifiers to install (and) know about the leakage inside the building," he said.

Children as young as 3 at Ivy Bilingual School know they need to wear face masks when the smog is bad. The school also invites mask makers to come in and cut open masks to demonstrate which ones have extra layers and are better for their health. The children can even educate their parents on the masks and how to fit them, said campus director Victoria Li.

The school monitors pollutant levels and instructs teachers to make sure windows are closed 15 minutes before school starts to give the air purifiers time to work. It also puts up green or red signs indicating whether children can go out and play.

Some international schools in Beijing have installed air-inflated sports domes for athletics, complete with air filters and rotating doors to help keep them sealed.

China's Coal Reduction Strategy Has a Dark Side