The return to flight is an important step for SpaceX. 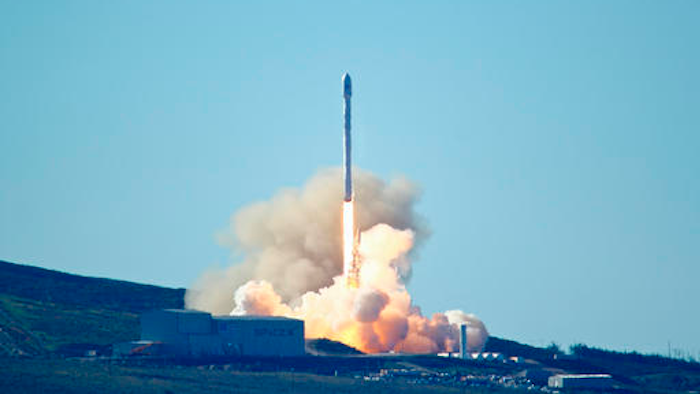 Space-X's Falcon 9 rocket with 10 satellites launches at Vandenberg Air Force Base, Calif. on Saturday, Jan. 14, 2017. The two-stage rocket lifted off to place 10 satellites into orbit for Iridium Communications Inc. About nine minutes later, the first stage returned to Earth and landed successfully on a barge in the Pacific Ocean south of Vandenberg.
Matt Hartman via AP

LOS ANGELES (AP) — A SpaceX Falcon 9 rocket blasted off from California on Saturday and placed a constellation of satellites in orbit, marking the company's first launch since a fireball engulfed a similar rocket on a Florida launch pad more than four months ago.

The two-stage rocket lifted off from Vandenberg Air Force Base at 9:54 a.m. carrying a payload for Iridium Communications Inc., which is replacing its entire global network with 70 next-generation satellites.

The satellites were deployed about an hour after launch.

About nine minutes after the rocket blasted off, to cheers from the control room, its jettisoned first stage landed upright on a so-called droneship in the Pacific Ocean south of Vandenberg — part of Spacex's effort to make boosters reusable.

The company has succeeded six times previously with landings on a barge or ashore.

A camera aboard the first stage gave viewers a you-are-there experience as it returned to Earth, flared landing rockets and made a perfect upright touchdown on the floating pad.

The return to flight is an important step for SpaceX, billionaire Elon Musk's California-based company that has about 70 launches in line, worth more than $10 billion. In addition to commercial launches, SpaceX ferries supplies to the International Space Station and is developing a capsule capable of carrying astronauts to the station.

The accident destroyed the rocket and its payload — a satellite that Facebook wanted to use to spread internet access in Africa — and grounded the Falcon 9 program as an investigation took place.

SpaceX announced this month that investigators concluded the accident involved a failure of one of three helium tanks inside the rocket's second-stage liquid oxygen tank.

The investigation involved the Air Force, NASA, the National Transportation Safety Board and the Federal Aviation Administration, which issued a license for the launch.

The September accident was the second time a Falcon 9 was destroyed. In June 2015, a Falcon loaded with space station supplies disintegrated shortly after liftoff. SpaceX determined that a support strut broke.

The 10 satellites launched Saturday are part of McLean, Virginia-based Iridium's project to replace its existing network of satellites that provide global voice and data communications.

The program, called Iridium NEXT, was not only delayed by the SpaceX accident but again most recently as a powerful storm headed into California last weekend.

Iridium plans six more Falcon 9 launches, each carrying 10 satellites, as part of a technology upgrade expected to be completed in 2018.

SpaceX's effort to recover Falcon first stages is intended to reduce costs by recycling a major piece of the launch system.

The first stage contains tanks for liquid oxygen and kerosene as well as nine engines that power the rocket and payload into space, then separates 2½ minutes into flight as the single-engine second stage ignites and continues on to place payloads in the proper orbit.

The first Falcon booster to safely land back on Earth now stands outside the company's headquarters.