Troops often struggle to operate with limited networks for communication. 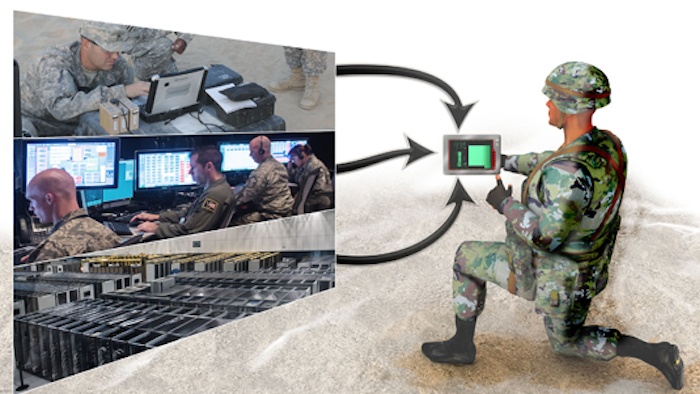 An artist’s concept depicts the goal of DARPA’s new Secure Handhelds on Assured Resilient networks at the tactical Edge (SHARE) program: create a system where information at multiple levels of security classification could be processed on a single handheld device using a resilient secure network that links devices without needing to route traffic through secure data centers.
DARPA

Troops in remote regions around the world often struggle to operate with limited networks for data sharing and communication—an encumbrance that is amplified when U.S. troops need to share classified or otherwise secure data with each other and coalition partners.

The usual process for sharing such information requires an end-to-end connection to secure servers via a dedicated digital “pipe” approved for the specific security level of data being transmitted.

If that tactical network is overloaded or if a glitch causes a break in the digital chain, the message or data is typically lost and the process must be repeated until a connection is completed, potentially hindering the mission in fast-moving tactical situations.

Additionally, the current computers and infrastructure needed to manage multiple levels of U.S. classified and coalition information are too bulky for tactical use in the field and can take months or longer to deploy.

To overcome this challenge, DARPA today announced its Secure Handhelds on Assured Resilient networks at the tactical Edge (SHARE) program.

SHARE aims to create a system where information at multiple levels of security classification could be processed on a single handheld device using a resilient secure network that links devices without needing to route traffic through secure data centers. This capability would be able to operate over existing commercial and military networks while maintaining the security of sensitive information and safety of operations.

“Troops forward deployed today have to have multiple laptops or devices that are approved to communicate at various levels of classification,” said Joe Evans, DARPA program manager. “The vision of SHARE is to develop software that moves the multilevel security management function from a handful of data centers down to trusted, handheld devices on the tactical edge.”

To achieve this vision, the SHARE program is focused on three areas: technologies and policy tools for distributed tactical security management on handheld devices; networking technologies based on resilient and secure architectures that work in challenging environments; and software that rapidly configures security across the network.

The end goal of the program is to demonstrate secure exchange of information at multiple levels of classification over unsecured military and commercial networks (e.g., Wi-Fi and cellular) using a heterogeneous mix of devices—from tactical radios to laptops to handheld devices.

Details are available on FedBizOpps.