6 Things We Learned at the Detroit Auto Show

The industry is flush with cash, but uncertain about the future. 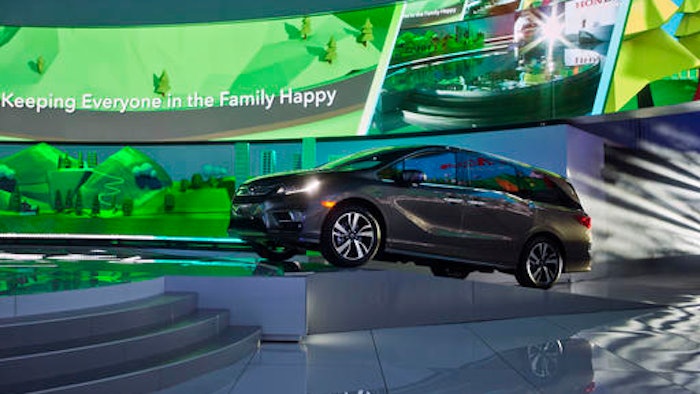 Multi-million-dollar displays show new versions of big sellers like the Toyota Camry, GMC Terrain and Honda Odyssey. New technology, from gesture controls in BMWs to further advances in self-driving cars, is everywhere. Auto companies are making big promises, like Chinese automaker GAC's plan to sell a vehicle in the U.S. by the end of 2019 and Volvo's goal of preventing all fatal crashes in its vehicles by 2020.

But there could be bumps ahead. U.S. sales are leveling off and the Trump administration could change the rules on trade. And it's not yet clear which companies will be the winners in a future of car-sharing and self-driving.

"The ground is so unstable beneath them right now," said Karl Brauer, a senior director of content at Kelley Blue Book.

Here's what we learned at the Detroit auto show.

After an unprecedented seven-year streak of sales increases and record sales of 17.55 million in 2016, U.S. sales of new cars and trucks are expected to slow down slightly in 2017. Interest rates and car prices are rising.

A glut of used cars will also put pressure on new-car sales. Automakers are cutting production of cars to lower their inventories, but they're also counting on new vehicles, gadgets and must-have technology, like Apple CarPlay and backup cameras, to fuel demand.

At the auto show, BMW is showing off a 5 Series with gesture controls, which let drivers control volume and other functions with hand signals. Lexus' new LS sedan has seats that give occupants Shiatsu massages. And multiple automakers are introducing new vehicles that will brake automatically to avoid an accident.

President-elect Donald Trump and his Twitter threats to tax Mexican auto imports were the talk of the show. Automakers reacted in different ways. General Motors, Volkswagen and Nissan said they won't change their production plans.

Toyota warned that the price of a U.S.-built Camry could rise by $1,000 if Trump taxes auto parts from Mexico. Sergio Marchionne, CEO of Fiat Chrysler, said FCA might be forced to abandon Mexico if the tax is too punitive, but he's waiting for more details. "This is new territory for most of us. None of us has had a tweeting president before," he said.

But AutoNation CEO Mike Jackson said Trump could help the industry by easing expensive regulations and lowering corporate taxes. He also thinks Trump will tread carefully with border taxes. "He will be a failure if he hurts consumers or companies," Jackson said.

The auto show isn't just for carmakers anymore. Waymo, Google's self-driving car division, reiterated that it doesn't plan to make its own cars, but wants to partner with established auto companies and others. Waymo announced the development of an in-house system of sensors and radars and showed off a self-driving minivan it has developed with Fiat Chrysler.

Fiat Chrysler CEO Sergio Marchionne says it makes sense for smaller companies to hook up with Waymo instead of developing self-driving platforms of their own. "I have no intention of recreating Silicon Valley in Michigan," he said. But other automakers, including Nissan and Ford, insist they will go it alone, partly because they don't want Waymo to own all the customer data that can be collected from self-driving vehicles. "We don't believe all the change coming to the market is going to be a private garden for anybody," said Nissan CEO Carlos Ghosn.

Automakers aren't just developing self-driving cars. They're trying to figure out where they fit in a world of car-sharing and ride-hailing. Ford said it's working with former New York Mayor Michael Bloomberg and others to help cities plan for future transportation trends.

Nissan has joined a similar group, 100 Resilient Cities, to help future city planning. Volvo is signing up 100 families in Sweden and giving them self-driving cars to see how they use them in everyday life.

Volvo and Buick are already selling Chinese-built vehicles in the U.S. But so far, no Chinese automaker has managed to crack the U.S. market, where tough safety regulations and dealer franchise laws can be a barrier for newcomers.

Guangzhou Automobile Group hopes to change that. GAC unveiled three new vehicles at the auto show, including a plug-in hybrid, and said it plans to sell a five-passenger SUV in the U.S. by 2019. The GX7 SUV would have a starting price of $15,000, or around $10,000 less than the Toyota RAV4.

Automakers are tugging at buyers' heartstrings. Volkswagen is showing a prototype based on its iconic 1960s minibus. Dubbed the ID Buzz, it's an electric van that goes 270 miles on a charge.

Ford announced the return of the Bronco, the rugged SUV — and O.J. Simpson chase vehicle — which was last sold in 1996. And Jeep is bringing back its Wagoneer, the three-row, wood-sided classic that was discontinued in 1991.