They had 2 1/2 weeks to create 56 unique gingerbread houses out of toy bricks, one for each state and U.S. territory. 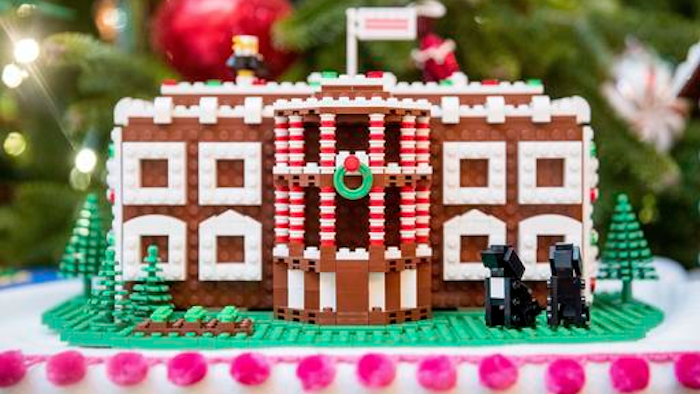 In this Tuesday, Nov. 29, 2016 file photo a LEGO model of the White House, one of fifty-six LEGO gingerbread houses, one for each state and territory, is displayed in the trees in the State Dinning Room at the White House during a preview of the 2016 holiday decor, in Washington. White House holiday displays were created this year by Lego's master builders, a team of seven at the company's US headquarters in Enfield, Conn., who devote hours and tens of thousands of toy bricks to projects that go on display around the world.
AP Photo/Andrew Harnik, File

ENFIELD, Conn. (AP) — The assignment for this year's White House holiday display came with a tight deadline. A team of Lego master builders, within 2 1/2 weeks, had to create 56 unique gingerbread houses out of the toy bricks, one for each state and U.S. territory.

For this group, it was child's play. The seven masters at the U.S. headquarters of Lego Systems in Enfield had them designed, built from more than 200,000 Lego pieces and in a van to Washington in time for the unveiling.

"We had an all-hands-on-deck kind of thing," said Paul Chrzan, one of the master builders. "We basically gave ourselves a day for each house. And we just built like crazy."

The team prides itself on building just about anything out of Lego bricks, including, among other recent projects, scenes for "The Lego Movie," a replica of Rio de Janeiro for the Olympics, and a life-size statue of Red Sox slugger David Ortiz. Promoted to the highest ranks for their skills, the master builders fulfill a marketing role for the Denmark-based company, but also see themselves as inspiring young builders.

The team of seven — including a former pastry chef, a retail worker and an actor — works in the model shop, a building down a slight hill from the administrative offices that features a Lego Christmas wreath on the walls, designers at computers and the sounds of builders tinkering with the latest structures.

Some, like Chrzan, 55, had a Lego affinity from childhood, when his Danish mother was among the first in his neighborhood to buy the sets. Others did not play with Lego as much as kids but studied sculpture or fine arts in school. All see the toy brick as a medium for artistic expression.

Master builder Pete Donner got his start as a model gluer out of high school in 1997. As a child, he said he was awful at building Lego sets, preferring to set aside the instructions. He said that helped him win the job he has now.

"For each one of us it's a unique journey," he said. "The secret to my success is I drew a lot and I built a lot."

While children and adults alike are awed to hear about his work, he said it is a job, with real deadlines and customer expectations. He said he keeps the stress in perspective by remembering a zinger from a retired colleague's wife who told him after a rough day: "Oh, Steve, what's the matter, did you run out of yellow brick today?"

Advances in technology over the past 20 years have dramatically changed the job, with proprietary Lego software churning out rough blueprints that once had to be etched by hand on graph paper. Still, a life-size model of a character can take 70 to 150 hours to design and 350 hours to build.

The models go on display at fairs and retail stores or are commissioned by promotional partners. One master builder, Erik Varszegi, said the deadline pressure sometimes leaves him feeling jealous of the amateur builders outside the company who sometimes spend a year or longer on projects of their own design.

Donner said he builds with Lego even after finishing his day's work. In addition to building with his two daughters, he has his own side projects.

"I have access to the biggest Lego collection in the world," he said. "Why wouldn't I utilize that?"