These micropower units are expected to enable a new generation of "smart" products. 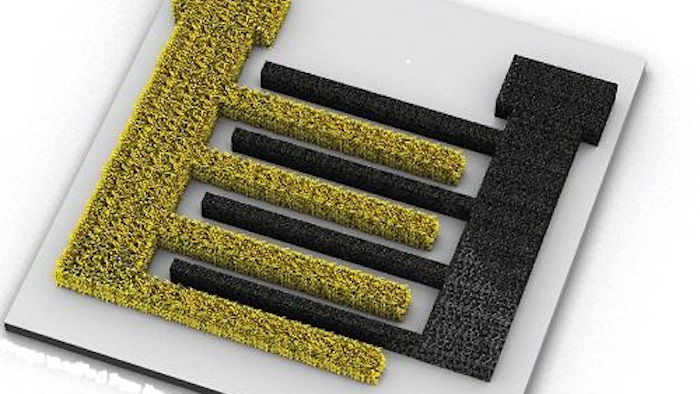 Energy storage units that can be integrated into wearable and flexible electronic systems are becoming increasingly important in today's world.

A research team from KAUST has now developed a microsupercapacitor that exploits three-dimensional porous electrodes. These micropower units are expected to enable a new generation of "smart" products, such as self-powered sensors for wearables, security, structural health monitoring and "internet of things" applications.

However, for these units to be tiny yet still efficient, the highest energy density must go into the smallest area.

One approach to carrying this out is to construct microbatteries using films with a thickness of just a few micrometers or less and to replace traditional electrolytes with solid-state ones. Thin film batteries have demonstrated relatively high energy density, which is the amount of energy they can store in a given area. However, they are afflicted by limited cycle life and poor power density, meaning they are slow to charge and discharge.

Microsupercapacitors are a faster alternative, and these may prove suitable for applications requiring power pulsing and very long cycle life.

"Also, while batteries must be charged at a constant voltage, a supercapacitor charges most efficiently by drawing the maximum current that the source can supply, irrespective of voltage," said KAUST Professor of Material Science and Engineering Husam Alshareef from the University's Functional Nanomaterials & Devices group.

This makes supercapacitors more appealing for self-powered system applications where the power source may be intermittent.

Alshareef's team has now developed integrated microsupercapacitors with vertically-scaled three-dimensional porous current collectors made from nickel foams to improve microsupercapacitor performance. The pores in the foam work to increase the surface area.

The microsupercapacitors were also asymmetric, using two different electrode materials for the cathode (nickel cobalt sulfide) and anode (carbon nanofiber), which nearly doubled the operating voltage. As a result, while delivering high power density (four milliwatts per square centimeter), the microsupercapacitors had an energy density of 200 microwatt-hours per square centimeter.

This is superior to state-of-the-art microsupercapacitors, which achieve between one and forty microwatt-hours per square centimeter, and is comparable to various types of thin film batteries. These high capacities were maintained even after 10,000 operating cycles.

"The high energy and power density achieve in these devices may meet the demand of on-chip storage for various types of integrated microsystems," noted KAUST Ph.D. student Qiu Jiang, the lead author of the study.