The German company released a sketch Monday of the Arteon. 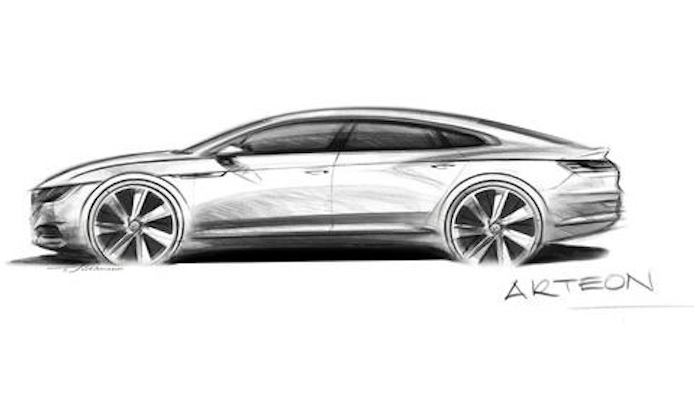 The artist rendering provided by Volkswagen on Monday, Nov. 28, 2016 shows the Volkswagen Arteon that will be presented during the 2017 Geneva Auto Show. The new developed model is positioned above the Passat and will be built in the Volkswagen plant in Emden, northern Germany.
Volkswagen AG via AP

FRANKFURT, Germany (AP) — Volkswagen is coming out with a new model that will add to its offerings of larger cars in the United States, where its market share has lagged the competition.

The German company released a sketch Monday of the Arteon, a four-door with a sloping roofline. It is to be unveiled at the Geneva auto show in March, and to go on sale in the summer of 2017. It should appear in the U.S. in 2018.

The upper midsize car occupies a position just above the slightly smaller Passat sedan made in Chattanooga, Tennessee. Volkswagen brand head Herbert Diess said last week that the company will focus on bigger cars and SUVs in the U.S. as it tries to overcome a scandal over cars it had equipped to cheat on diesel emissions tests. A new large SUV, the Atlas, is also on the way. Diess conceded that the company hasn't always been quick enough to meet shifting market trends in the US.

This year, Volkswagen-badged cars have claimed only 1.8 percent of the U.S. market through October, badly lagging competitors such as General Motors, Ford, Fiat Chrysler and Toyota.

The company says the Arteon will combine expressive design with practicality, in the form of a large trunk with plenty of carrying space. A news release had no details about price, engine types or technical specifications ahead of the Geneva show, but the company indicates there will be both diesel and gasoline-powered four-cylinder versions.

Tobias Suehlmann, Volkswagen's exterior designer, was quoted in the news release as saying that the vehicle first "arouses enthusiasm through its expressive design" and then "surprises through its practical virtues."

Production will be at the company's plant in Emden, in north Germany.