She offered business leaders a trade-off: more investment in science and technology with more evenly spread benefits of private enterprise. 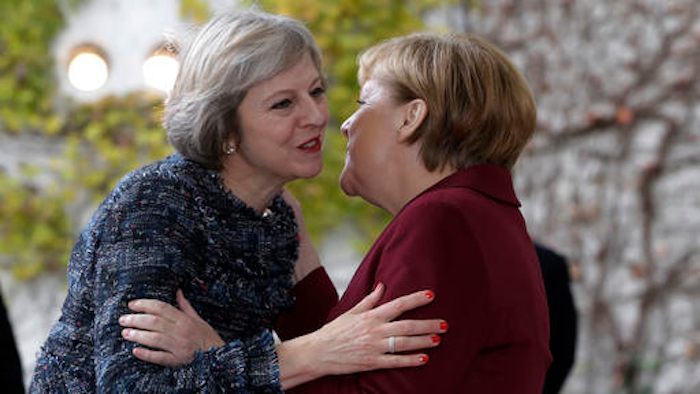 Britain's Prime Minister Theresa May, left, is welcomed by German Chancellor Angela Merkel prior to a meeting of the government heads of Germany, France, Italy, Spain and Britain with U.S. President Obama in the chancellery in Berlin, Germany, Friday, Nov. 18, 2016.
AP Photo/Michael Sohn

LONDON (AP) — British Prime Minister Theresa May offered business leaders a trade-off Monday, pledging more investment in science and technology while insisting that the benefits of private enterprise must be more evenly spread around the country.

May warned those attending the Confederation of British Industry conference that business has been undermined by a limited few who have damaged the reputation of many. Whether fair or not, she said things had to change.

"When a small minority of businesses and business figures appear to game the system and work to a different set of rules, we have to recognize that the social contract between business and society fails — and the reputation of business as a whole is undermined," she said.

The comments were offered as part of a grand bargain of sorts, in which May promised support and investment in the rocky days ahead as the country prepares to leave the European Union. They acknowledged a nation still suffering from the impact of the 2008 financial crisis — one from which many households have not recovered.

She pledged more investment in research and development, hoping to make the country a leader in science and technology. As part of that effort, May declared that Britain will commit to investing an extra 2 billion pounds a year ($2.4 billion) by 2020 in research and development in hopes of putting the country at the cutting-edge of science and technology.

The goal is to help fuel the economy at a time when Britain is leaving the EU following the referendum in June.

But she also suggested she might slash corporate taxes, matching promises made by Donald Trump to cut rates during his successful campaign to become president of the United States.

She said her goal was for Britain to have the lowest corporate tax rates among the Group of 20 countries. The rate now stands at 20 percent and is expected to fall to 17 percent by 2020. Trump has promised a tax rate of 15 percent.

"Now we want to go further, and look at how we can make our support even more effective — because my aim is not simply for the U.K. to have the lowest corporate tax rate in the G20, but also a tax system that is profoundly pro-innovation," she told business leaders.

The investment in science is set to be the first step in May's industrial strategy, which is "not about propping up failing industries or picking winners, but creating the conditions where winners can emerge and grow."

May also stressed that she will "always believe in business," even as she insisted that those benefits must be more widely spread around the country.