The country wants a permanent space station, and has planned a trip to Mars. 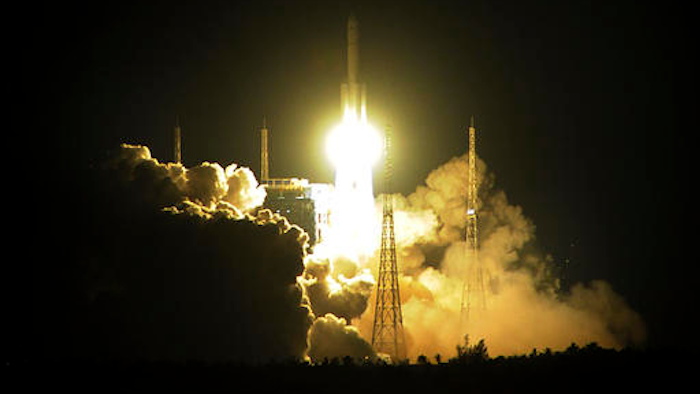 In this photo taken Thursday Nov. 3, 2016, a CZ-5 heavy-lift rocket, the latest in China's Long March series, blasts off from the Wenchang Satellite Launch Center in Wenchang county in south China's Hainan province. China says its plans for a permanent space station remain on track with the successful launch of its new heavy-lift Long March 5 rocket.
Chinatopix Via AP

BEIJING (AP) — China's plans for a permanent space station remain firmly on track with the successful launch of its new heavy-lift Long March 5 rocket that will enable ambitious future missions, including a planned trip to Mars.

The towering rocket that blasted off Thursday night from the Wenchang launch center will be used to launch components for the Tiangong 2 space station and other massive payloads.

China launched the Tiangong 2 precursor facility in September and sent up two astronauts in mid-October to live aboard it for 30 days. The station's 20-ton core module will be launched in 2018, and the completed 60-ton station is set to come into full service in 2022 and last at least a decade.

The Tiangong, or "Heavenly Palace," stations are considered stepping stones to an unmanned mission to Mars by the end of the decade.

The Long March 5's next mission will be lofting the robotic Chang'e 5 probe to the moon next year to land a rover before returning to Earth with samples.

The 57-meter (187-foot) two-stage rocket is China's largest, capable of carrying 25 tons of payload into low-earth orbit and 14 tons to the more distant geostationary transfer orbit, in which a satellite orbits constantly above a fixed position on the earth's surface. That is more than twice the carrying capacity of China's most capable current rocket, the Long March 7.

It is also just slightly less brawny than the most powerful rocket in service, the United Launch Alliance's Delta IV, although SpaceX's Falcon Heavy, planned for launching next year, is designed to carry a payload into low-earth orbit of more than twice that size.

Not to be outdone, China is working on an even bigger rocket capable of lifting 100 tons of payload into low-earth orbit, Tian Yulong, the program's chief engineer, was quoted as saying at a news conference following Thursday's launch. That would put it in the range of the now-retired Saturn 5 rockets the U.S. used in the Apollo lunar missions.

Unlike earlier rockets that used highly toxic fuels, the Long March 5 burns a more environmentally friendly and less expensive kerosene-liquid oxygen-liquid hydrogen mix. It has a takeoff weight of 870 tons and a thrust of 1,060 tons. Wenchang on the southern island of Hainan is China's fourth and newest launch site.

Although Thursday's mission was mainly designed to test the reliability of the Long March 5, it also carried a satellite for testing technology used to observe space debris, new electric sources and electric propulsion, according to the official Xinhua News Agency.

Its upper section, the Yuanzheng 2, is designed to better launch multiple satellites and send them directly into orbit, Xinhua said.

In a joint congratulatory letter following the launch, the ruling Communist Party's Central Committee, the cabinet and the commission overseeing the military praised the new rocket as "the pinnacle of innovation in carrier rocket science and technology."

"Its successful launch... marks a milestone in China's transition from a major player in space to a major power in space," the letter said, according to state media.