The unmanned Falcon rocket erupted in a fireball Sept. 1 during pre-launch testing at Cape Canaveral Air Force Station. Both the rocket and the satellite on board were destroyed. 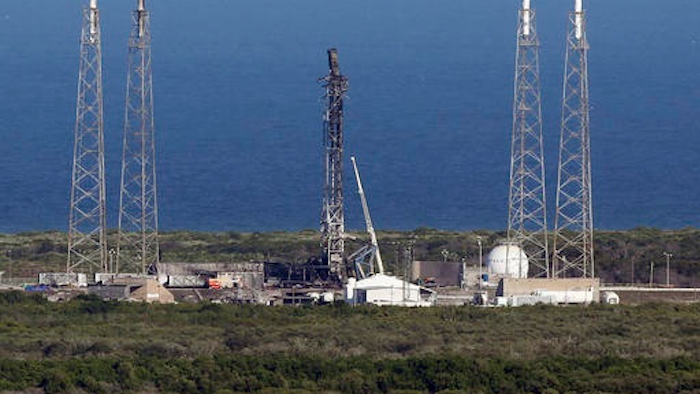 This Thursday, Sept. 8, 2016 file photo shows the damaged SpaceX launch complex 41 at Cape Canaveral Air Force Station in Florida. The company's Falcon 9 rocket exploded during its launch on Sept. 1. paceX is closer to understanding last month's rocket explosion at its launch pad. On Friday, Oct. 28, 2016 SpaceX said the investigation has been further narrowed to one of the pressurized helium containers, located in the second-stage oxygen tank.
Red Huber/Florida Today via AP, File

The company already had targeted the rocket's helium system as being breached. On Friday, SpaceX said the investigation has been further narrowed to one of the pressurized helium containers, located in the second-stage oxygen tank.

In recent testing, SpaceX said it's managed to recreate a system failure, noting it can happen entirely through helium-loading conditions, namely temperature and pressure. More tests are planned at SpaceX facilities in Texas to identify the precise cause.

The unmanned Falcon rocket erupted in a fireball Sept. 1 during prelaunch testing at Cape Canaveral Air Force Station. Both the rocket and the satellite on board were destroyed. Facebook had wanted to use the Israeli-made satellite to spread internet access in Africa.

It was the second Falcon failure in just over a year for Elon Musk, the billionaire behind SpaceX. In June 2015, a rocket loaded with space station supplies erupted shortly after liftoff. Company officials said the two accidents were unrelated, although the 2015 loss also originated in the upper-stage helium system. In that instance, a support strut broke.

"SpaceX's efforts are now focused on two areas - finding the exact root cause, and developing improved helium loading conditions that allow SpaceX to reliably load Falcon 9," the company said on its web site. "This is an important milestone on the path to returning to flight."

Falcon rockets have been grounded as SpaceX conducts the investigation along with NASA, the Air Force, the Federal Aviation Administration and industry experts. The California-based company has about 70 launches in line, worth more than $10 billion.

The September explosion — which occurred as the rocket was being fueled for a test-firing of its engines — damaged the SpaceX launch pad. Until repairs can be completed, the company has the option of launching from its soon-to-be-modified pad at neighboring Kennedy Space Center — once used by NASA's moon rockets and space shuttles — or from Vandenberg Air Force Base in California.

Besides launching commercial satellites, SpaceX hauls supplies to the International Space Station for NASA and is developing a bigger Falcon capable of flying astronauts to the orbiting lab in another year or two. Less than two weeks ago, NASA's other major shipper, Orbital ATK, resumed launches from Wallops Island, Virginia, following an explosion of its Antares rocket soon after liftoff in 2014.