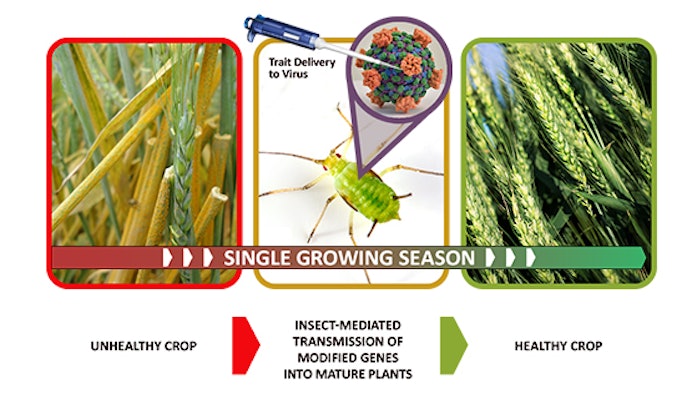 It may not be obvious to humans, but the life of a plant is full of peril. Viruses, pests, fungi, herbicides, drought, pollution, salinity, flooding, and frost—the plants that we depend on for food, clean air, and materials are challenged by myriad threats, natural and man-made.

By extension, human populations are put at risk when food security is challenged and the agricultural underpinnings of our economies are destabilized, especially when threats emerge rapidly or unexpectedly.

Farmers and others responsible for plant health use longstanding tools such as crop rotation, selective breeding, pesticides, slash-and-burn clearing, and quarantine to shelter plants and defend against the worst effects of pathogens, pests, and environmental insults, but these methods can be slow, inefficient, and damaging to the environment, and may require extensive and expensive infrastructure.

And while scientists and farmers are increasingly turning to molecular techniques to improve resilience in plant varieties, today’s genomic tools generally do not allow for alteration of mature plants.

In the process, DARPA aims to transform certain insect pests into “Insect Allies,” the name of the new effort.“Insects eat plants and insects transmit the majority of plant viruses,” said Blake Bextine, the DARPA program manager for Insect Allies. “DARPA plans to harness the power of this natural system by engineering genes inside plant viruses that can be transmitted by insects to confer protective traits to the target plants they feed upon.”

Insect Allies’ three technical areas—trait design, insect vector optimization, and selective gene therapy in mature plants—layer together to support the goal of rapidly transforming mature plants to protect against natural or intentional agricultural disruption without the need for extensive infrastructure. The foundational knowledge and generalizable tools developed under the program could also support future agricultural innovation.

One of the most effective existing methods for protecting plants—selective breeding of disease resistance—typically involves five to seven years of work to identify the relevant protective genes and another 10 years or more to propagate the desired traits throughout plant populations.

Insect Allies aims to effect the expression of desired traits within a single season. Performers will be challenged to develop compatible systems of naturally occurring plant viruses, herbivorous insects, and target crops, then genetically tune these systems to maximize transmission and uptake of traits across the entire target plant population with zero transmission to non-target plants.

“Genetic modification of plants has historically been done only to plant embryos inside of laboratories using tissue cultures,” Bextine said. “Transforming mature plants en masse would be an enormous achievement and pave the way for future breakthroughs in agriculture.”

Insect Allies will emphasize biosafety and biosecurity. All work will be conducted inside closed laboratories, greenhouses, or other secured facilities.

DARPA will host a Proposers Day on November 18, 2016, at the Executive Conference Center in Arlington, Va., to further clarify the program vision and answer questions from potential proposers.

There is a webcast option for the Proposers Day. Advance registration is required. Additional details are provided in a Special Notice. Full program details will be made available in a forthcoming Broad Agency Announcement.