The NASA spacecraft circling Jupiter has hit another snag. 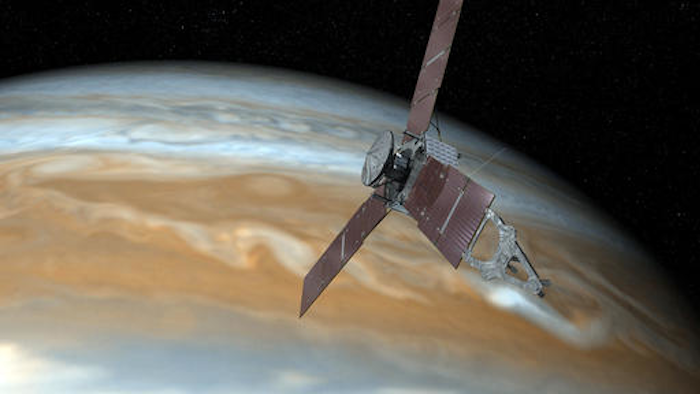 This undated artist's rendering shows NASA's Juno spacecraft making one of its close passes over Jupiter. NASA said Wednesday, Oct. 19, 2016, that the Juno spacecraft circling Jupiter went into safe mode, turning off its camera and instruments. The space agency said the Juno craft is healthy as engineers try to figure out what went wrong.
NASA via AP

The space agency said Wednesday that Juno detected a problem, went into safe mode and shut off its cameras and instruments hours before it was supposed to pass over Jupiter's dense cloud tops.

Juno rebooted its onboard computer and can communicate with Earth, but its activities are limited until engineers diagnose what went wrong.

"It's too early to take a guess," but the issue isn't caused by the intense radiation belts surrounding Jupiter because the spacecraft was far away when it entered safe mode, said mission chief scientist Scott Bolton of the Southwest Research Institute in San Antonio.

It's the second setback in less than a week for the solar-powered Juno, which has been orbiting the giant planet since July on a $1.1 billion mission to explore its poles, atmosphere and interior.

Last week, mission managers decided to postpone an engine firing planned for Wednesday after a pair of valves in the spacecraft's propulsion system didn't work as expected.

The delay means Juno won't swing close again to Jupiter until December. The spacecraft made its first close pass in August, beaming back pictures of Jupiter's stormy north pole, which appeared bluer than the rest of the planet.

Scientists continued to pore over close-up images from the first flyby, determining that Jupiter's magnetic fields and northern and southern lights were more powerful than expected.

The Juno mission was designed to fly closer to Jupiter than previous spacecraft, coming within 2,500 miles of the surface. Some three dozen close passes are planned during the 20-month mission.

Over at Mars, an experimental lander that was supposed to touch down on the red planet Wednesday lost contact with ground controllers at the European Space Agency. The mother ship successfully slipped into orbit around Mars and will study the atmosphere, but the fate of the lander was still unknown.