That Pilot May Someday Be a Robot

Inside the cockpit is a robot with spindly metal tubes and rods for arms and legs, and a claw hand grasping the throttle. 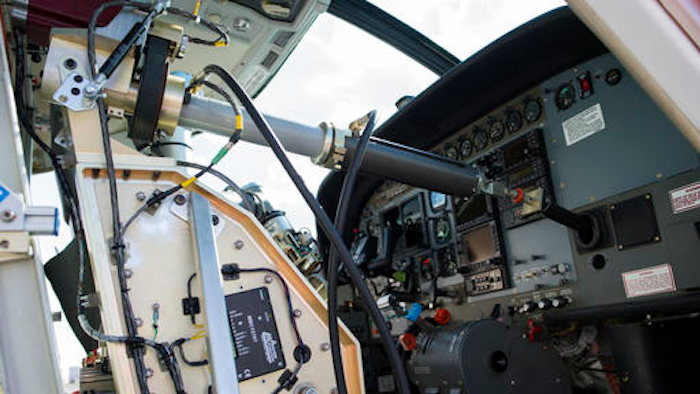 Aurora Flight Sciences' Aircrew Labor In-Cockpit Automantion System (ALIAS), is mounted in the co-pilot seat of a Cessena Caravan aircraft at Manassas Airport in Manassas, Va., Monday, Oct. 17, 2016. Government and industry are working together on a robot-like autopilot system that could eliminate the need for a second human pilot in the cockpit.
AP Photo/Cliff Owen

MANASSAS, Va. (AP) — From the outside, the single-engine Cessna Caravan that took off from a small airport here on Monday looked unremarkable. But inside the cockpit, in the right seat, a robot with spindly metal tubes and rods for arms and legs and a claw hand grasping the throttle, was doing the flying. In the left seat, a human pilot tapped commands to his mute colleague using an electronic tablet.

The demonstration was part of a government and industry collaboration that is attempting to replace the second human pilot in two-person flight crews with robot co-pilots that never tire, get bored, feel stressed out or become distracted.

The program's leaders even envision a day when planes and helicopters, large and small, will fly people and cargo without any human pilot on board. Personal robot planes may become a common mode of travel. Consider it the aviation equivalent of the self-driving car.

The program, known as Aircrew Labor In-Cockpit Automation System or ALIAS, is funded by the Defense Advanced Research Projects Agency and run by Aurora Flight Sciences, a private contractor. With both the military and airlines struggling with shortages of trained pilots, defense officials say they see an advantage to reducing the number of pilots required to fly large planes or helicopters while at the same time making operations safer and more efficient by having a robot step in to pick up the mundane tasks of flying.

The idea is to have the robot augment the human pilot by taking over a lot of the workload, thus freeing the human pilot — especially in emergencies and demanding situations — to think strategically.

"It's really about a spectrum of increasing autonomy and how humans and robots work together so that each can be doing the thing that its best at," said John Langford, Aurora's chairman and CEO.

Sophisticated computers flying planes aren't new. In today's airliners, the autopilot is on nearly the entire time the plane is in the air. Airline pilots do most of their flying for brief minutes during takeoffs and landings, and even those critical phases of flight could be handled by the autopilot.

But the ALIAS robot goes steps further. For example, an array of cameras allows the robot to see all the cockpit instruments and read the gauges. It can recognize whether switches are in the on or off position, and can flip them to the desired position. And it learns not only from its experience flying the plane, but also from the entire history of flight in that type of plane.

The robot "can do everything a human can do" except look out the window, Langford said. But give the program time and maybe the robot can be adapted to do that too, he said.

In other ways, the robot is better than the human pilot, reacting faster and with knowledge instantaneously available, able to call up every emergency checklist for a possible situation, officials said.

It some ways, it will be like flying with a "co-pilot genius," Langford said. "The robot carries in them the DNA of every flight hour in that (aircraft) system, every accident," he said. "It's like having a human pilot with 600,000 hours of experience."

The ALIAS robot is designed to be a "drop-in" technology, ready for use in any plane or helicopter, even 1950s vintage aircraft built before electronics.

But the robot faces a lot of hurdles before it's ready to start replacing human pilots, not the least of which is that it would require a massive rewrite of Federal Aviation Administration safety regulations. Even small changes to FAA regulations often take years to make.

Elements of the ALIAS technology could be adopted within the next five years, officials said, much the way automakers are gradually adding automated safety features that are the building blocks of self-driving technology to cars today. Dan Patt, DARPA's ALIAS program manager, said he thinks replacing human pilots with robots is still a couple of decades away, but Langford said he believes the transition will happen sooner than that.

Pilot unions, however, are skeptical that robots can replace humans in the cockpit. Keith Hagy, the Air Line Pilots Association's director of engineering and safety, pointed to instances of multiple system failures during flights where only through the heroic efforts of pilots able to improvise were lives saved. In 2010, for example, an engine on a jumbo-sized Qantas airliner with 450 people on board blew up, firing shrapnel that damaged multiple other critical aircraft systems and the plane's landing gear. The plane's overloaded flight management system responded with a cascading series of emergency messages for which there was no time to respond. By chance, there were five experienced pilots on board — including three captains — who, working together, were able to land the plane. But it was a close call.

"Those are the kind of abnormal situations when you really need a pilot on board with that judgment and experience and to make decisions," Hagy said. "A robot just isn't going to have that kind of capability."

David Strayer, a University of Utah professor of cognition and neural science who has studied the human-machine interface, agreed.

"Pilots are going to make mistakes, but a skilled human in that context, their expertise is quite amazing," he said. "It's a high bar for the robot to meet."

Pilots to Testify on Boeing