The sticky crustaceans can slow the ship and increase its fuel consumption by 40 percent. 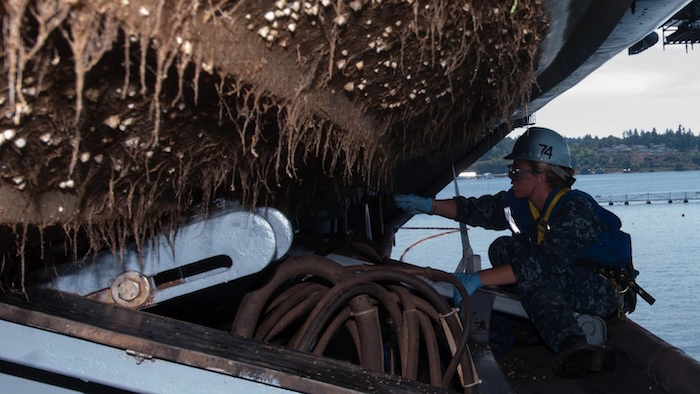 A Sailor scrapes barnacles from the bottom of a rigid-hull inflatable boat aboard the aircraft carrier USS John C. Stennis (CVN 74). When clustered in thick clumps on a vessel's hull, barnacles can slow the ship and increase its fuel consumption. The Office of Naval Research is sponsoring research to develop environmentally friendly hull coatings to fight off barnacles.
Mass Communication Specialist Seaman Apprentice Christopher Frost

To deal with this small yet expensive pest, the Office of Naval Research (ONR) is sponsoring work by Dr. Xuanhe Zhao, an associate professor at the Massachusetts Institute of Technology. Zhao and his team have created an adhesive material that can help barnacle-fighting coatings stick to metal hulls better and longer; retain moisture and not dry out; and avoid the use of toxic chemicals and other pollutants.

“Biofouling is a major concern for the Navy, leading to hundreds of millions of dollars a year in fuel and maintenance costs,” said Dr. Steve McElvany, a program manager in ONR’s Sea Warfare and Weapons Program, who oversees Zhao’s research. “It’s especially bad when the ship is docked in port. Barnacles like those environments and tend to accumulate rapidly, in large quantities.”

Barnacles are adversaries as old as sailing itself. For centuries, mariners fought the critters with everything from tar to wax. Currently, the Navy uses copper-based paints and coatings to kill barnacles or prevent them from latching on to hulls. While effective, these toxic materials leach into the water, negatively impacting aquatic life. The Navy is seeking environmentally friendly coatings that can keep hulls clean and reduce fuel costs.

One solution vital to Zhao’s efforts could be hydrogels, which can absorb water and hold it in the form of a gel. These extremely soft, slippery substances can be spread on a ship’s underside like sealant to prevent barnacles from sticking to the metal. Barnacles prefer hard, solid spots to attach themselves and don’t like surfaces such as hydrogels.

Zhao’s research addresses the challenge of keeping hydrogel coatings soft, wet and securely fastened to metal hulls. Using a chemical bonding agent called benzophenone, his team devised a way to fuse hydrogels with elastomers—elastic polymers (like silicone and natural rubber) that are stretchy, durable and impervious to water. The result is a sticky, water-trapping barrier that keeps hydrogels robust enough to potentially withstand the harsh hull conditions of a ship at sea.

“Our approach was inspired by human skin,” said Zhao. “The skin has an outer epidermis that protects nerves, capillaries, muscles and organs—and keeps them from drying out, maintaining their compliance. However, we can actually stretch the hydrogel-elastomer hybrid to seven times its original length and the bond still holds. It’s that strong and flexible.”

The hybrid also has potential as a circuit for transporting ions, which are electrically charged molecules. These natural circuits could be used to detect the presence of barnacles on a hull, said Zhao. Once the crustaceans are identified, a specially designed hydrogel could pump barnacle-repelling enzymes via grooves etched into the elastomer.

In addition to biofouling defense, Zhao believes the hybrid material also might be used as a smart bandage outfitted with electronics and drug reservoirs—allowing it to monitor wounds and vital signs like body temperature, detect bacteria and administer antibiotics, and alert a doctor when more medicine is required.

“Our main focus is helping the Navy deal with the issue of biofouling,” said Zhao. “But it’s also exciting to think of the other possibilities for this material. This is still very basic research, but we envision numerous potential applications and uses for hydrogels and elastomers.”

Zhao is a 2014 winner of ONR’s Young Investigator Program, a prestigious grant awarded to scientists and engineers with exceptional promise for producing creative, state-of-the-art research that appears likely to advance naval capabilities.