Obama Nerds Out on Science

The geek-in-chief was in his element Thursday as he toured cutting-edge projects. 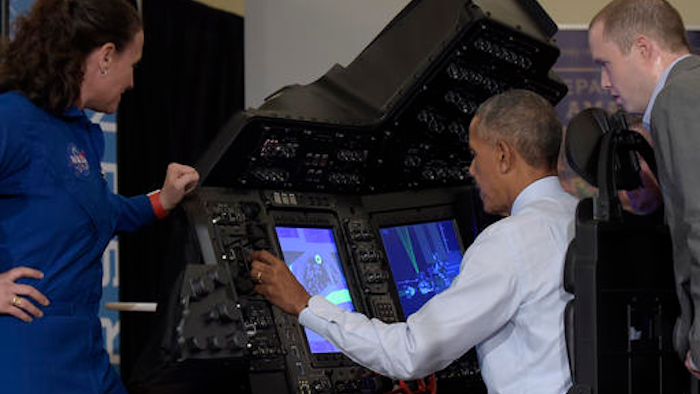 PITTSBURGH (AP) — President Barack Obama has a confession: He's a science geek, a nerd, and he's not apologizing to anyone.

The geek-in-chief was in his element Thursday as he toured cutting-edge projects during a White House Frontiers Conference. Obama beamed as he took the chair of a Boeing Starliner Flight Simulator, with its panoply of buttons and monitors and futuristic gizmos. "Right, left, left," his trainer said, urging minute course corrections.

"Your ride is here, baby," Obama said after docking the simulator on the International Space Station. "This is like the Uber shuttle. In case anybody calls, we'll be there in five minutes."

Minutes later, the president gawked at a self-directed quadcopter, or mini-drone, used to inspect infrastructure like bridges. As a computer screen showed the drone's preset path, the drone moved up and down, left and right, emitting neon green light and whizzing loudly.

He offered a presidential fist-bump to Nathan Copeland, a paralyzed man who is the first person who can feel sensation through his mind-controlled robotic arm. "What a story," Obama said incredulously.

The Harvard-trained lawyer has never been shy about his fascination with all things scientific and high-tech. Over the years he's fired off a high-speed marshmallow air cannon at a White House science fair and rubbernecked at robots built by teenagers.

He used his appearance Thursday to scoff at those who "willfully ignore facts or stick their hands in the sand," such as those who question global warming.

"Sixty years ago, when the Russians beat us to space, we didn't deny that Sputnik was up there. That wouldn't have worked," Obama said. "No, we acknowledged the facts and then built a space program almost overnight, and then beat them to the moon."

Urging a new aspiration for the nation, Obama has set a goal to send humans to Mars by the 2030s, and in Pittsburgh he got a look at the SpaceX Dragon Spacecraft, part of ongoing research to develop vehicles that could transport astronauts to the red planet.

"It's like putting up with Sasha and Malia in the back of the car," he said. "It's a long car ride."