The defect is causing implantable heart devices to fail much earlier than expected. 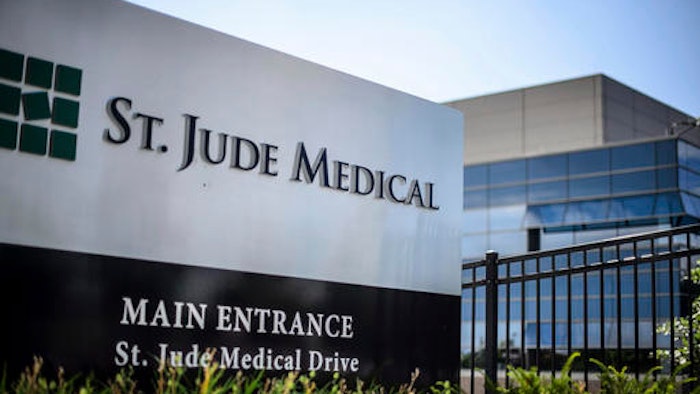 This Wednesday, July 22, 2015, file photo shows St. Jude Medical corporate headquarters, in Little Canada, Minn., just north of St. Paul. Medical device maker St. Jude Medical is warning doctors and patients about a rare battery defect in some of its implantable heart devices that can cause them to fail much earlier than expected.
Glen Stubbe/Star Tribune via AP, File

WASHINGTON (AP) — Medical device maker St. Jude Medical is warning doctors and patients about a rare battery defect in some of its implantable heart devices that can cause them to fail much earlier than expected.

The company said Tuesday that two deaths have been linked to the problem and 10 more patients fainted because the devices stopped working.

St. Jude said the batteries should be replaced immediately after patients receive an electronic, vibrating alert from the device. Normally patients have up to three months to have batteries replaced. But the company said a small subset of its heart-shocking defibrillators can fail within 24 hours of the alert. The problem affects a subset of its Fortify, Quadra and Unify devices. Specific model and serial numbers are available on St. Jude's website.

The metallic implants are used to treat dangerous heart rhythms that can lead to cardiac arrest, heart failure and death.

The design flaw is caused by buildup of deposits around lithium batteries that power the devices. St. Jude said it fixed the issue in May 2015 and removed all affected devices from distribution and hospital inventories.

Nearly 350,000 patients worldwide could have devices affected by the issue, according to a separate statement from the Food and Drug Administration. As in similar cases, regulators are not recommending that patients with the devices have them preemptively removed. That's because the risks of the surgical procedure are generally much higher than the potential harms of the defect itself.

St. Jude noted the actually prevalence of the issue is very rare: "the vast majority of devices sold worldwide have not experienced premature battery depletion."

Jefferies analyst Raj Denhoy estimated the actual number of devices affected by the problem is likely 2,000 — at the most — based on prior estimates of lithium battery deposits published in the medical literature.

"It seems unlikely that St. Jude will experience any protracted impact to its market share," Denhoy said in a note to investors.

All major manufacturers of implantable heart defibrillators have reported malfunctions and recalls, including competitors Medtronic Inc., Boston Scientific and St. Jude itself. In 2010, the St. Paul, Minnesota-based company stopped selling defibrillators with certain wires because they could prematurely crack and fail. Last year the company paid $14.5 million to settle hundreds of lawsuits filed by customers who received devices with the wires.

Earlier this year Abbott Laboratories announced it would acquire St. Jude for approximately $25 billion. Tuesday's announcement is not expected to affect the deal.