Sandia researchers wanted to find out if it was feasible to build and operate a high-speed passenger ferry solely powered by hydrogen fuel cells. 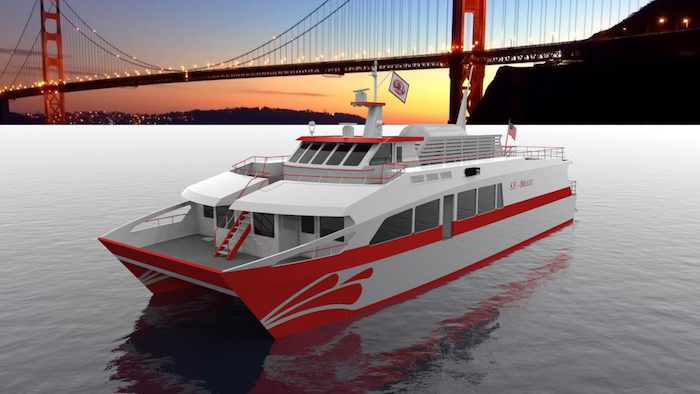 LIVERMORE, Calif. -- Nearly two years ago, Sandia National Laboratories researchers Joe Pratt and Lennie Klebanoff set out to answer one not-so-simple question: Is it feasible to build and operate a high-speed passenger ferry solely powered by hydrogen fuel cells? The answer is yes.

"The study found that it is technically possible to build a high-speed, zero-emission hydrogen-powered ferry. We also believe this can be done with full regulatory acceptance," said Pratt. "In the course of the study, we examined over 10 major issues where feasibility was initially unknown. SF-BREEZE sailed through them all," added Klebanoff.

Tom Escher, president of San Francisco's Red and White Fleet, first conceived of the project when he asked if it was possible to do away with emissions altogether on one of his ferries.

"This is a game changer. We can eliminate environmental pollution from ships," he said. "This could have a major impact on every shipyard in the country."

Funded by the Department of Transportation's Maritime Administration and led by Sandia, the feasibility study brought together the American Bureau of Shipping (ABS), the U.S. Coast Guard, naval architect Elliott Bay Design Group, the Port of San Francisco and dozens of other contributors.

"Not long ago, the prospect of pollution-free transportation seemed like science fiction," said Maritime Administration Administrator Paul "Chip" Jaenichen. "Today, through public-private collaboration on projects like SF-BREEZE, we are making progress to turn it into a reality."

Hydrogen-powered ferries do exist, but most are smaller, slower vessels used for tours on lakes and rivers. The SF-BREEZE study set out to discover whether it is technically feasible to build a large, fast vessel; it could meet maritime regulations; and it could be economically competitive with modes of transportation already available in the San Francisco Bay area.

The group drew up conceptual specifications: a 150-passenger commuter ferry that would travel four 50-mile round-trip routes each day at a top speed of 35 knots (roughly 39 miles per hour) about 60 percent of the time. The ferry could refuel midday, between the morning and afternoon commutes.

"This kind of boat has never been built before," said mechanical engineer Curt Leffers, the project manager for Elliott Bay Design Group. "Hydrogen fuel cells are heavier than diesel engines for a given power output, so achieving the right power-to-weight ratio for the vessel was tricky."

The need for speed drove the design to a slightly longer catamaran. The engineers were able to save weight by consolidating the support equipment for the fuel cells.

To achieve the necessary safety standoffs from the fuel cells, the designers placed the fuel cells on the main deck of the vessel in a separate compartment. Leffers explained that this provides physical separation between the fuel cells and passengers.

The project supports Elliott Bay's commitment to the environment. "I'm a big believer in developing environmentally friendly designs," Leffers added. "This project has been terrific because it's something I really believe in. I think that this proof-of-concept, that this boat can be built, is very important for future projects."

ABS issued a conditional Approval in Principal to verify that the conceptual design would be compliant with applicable regulations and rules and to identify any potential gaps in compliance. Combining their assessment with feedback from the U.S. Coast Guard, Sandia found no regulatory show-stoppers and concluded that the vessel will be acceptable from a regulatory perspective once a more detailed "ready-to-build" design is generated.

"ABS is proud to have participated in the SF-BREEZE feasibility study and advance the research on unique challenges of designing a high-speed passenger ferry powered solely by hydrogen fuel cells," said ABS Chief Technology Officer Howard Fireman. "The collaboration with Sandia and the project team extends our knowledge base and the potential technology transfer to address the challenge of reducing the environmental footprint."

The hydrogen ferry would cost about twice as much as a comparable diesel ferry with today's prices. Much of that cost is in the fuel cell system.

"Right now, we can't achieve economic parity with a comparable diesel ferry," said Pratt. "But this is a question we need to explore further. Is economic parity necessary from the outset? Lessons from the automotive market tell us maybe not."

Optimization is Next Step

The next step is to optimize the vessel design. "We need to consider if the parameters we started out with are optimal for the technology that is available today," said Pratt.

Working with Red and White Fleet and other stakeholders, Klebanoff and Pratt are now undertaking an optimization study. They will examine the tradeoffs between speed and costs and emissions among other factors.

Red and White Fleet President Escher sees SF-BREEZE as the start of a revolution in marine transportation. "When this boat is launched, it will be a seed. When you add a seed to water, it grows," he said. "This seed could grow into a 40-meter tugboat, a 70-meter supply boat or a 300-meter oceangoing ship trading between the West Coast and Hawaii. And all at zero pollution."