This could be the first one-legged hopper that does not require a connection to an external motor or power source. 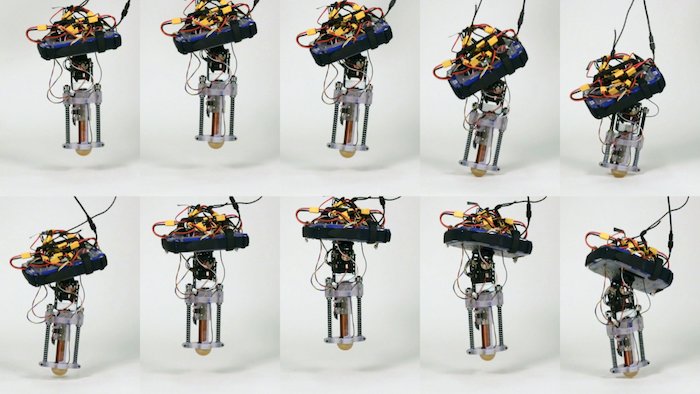 The thrust-producing mechanism of the robot’s leg is an actuated prismatic joint, called a linear elastic actuator in parallel (LEAP).
Disney Research

One-legged hopping robots have long been used to study balance issues, but their dependence on off-board power has kept them tethered, literally, to the lab. Now, Disney Research has figured out how to build a hopper that runs on battery power.

The researchers believe theirs is the first one-legged hopper that does not require a connection to an external motor or power source.

Though one-legged robots can only move by hopping, freeing them of tethers would open up new, non-research uses, said Joohyung Kim, associate research scientist at Disney Research. The highly efficient leg modules also can be combined to create multi-legged robots.

By concentrating on building a light, efficient robot, Kim and his collaborators, Katsu Yamane and Zachary Batts, developed a robot weighing a little less than five pounds and about one foot in height. As of now, the robot can maintain its balance for approximately seven seconds, or 19 hops, but the researchers anticipate an increase in on-board computing power could keep it upright far longer.

The researchers will present their tetherless hopper at the International Symposium of Experimental Robotics, ISER 2016, in Tokyo, Japan, Oct. 3-6.

Many hoppers have been hydraulic devices. But hydraulic actuation requires off-board motors and is energetic enough to pose issues outside of a controlled laboratory environment, Yamane said.

To achieve the high-speed, high-force actuation necessary to make the robot hop using electrical power, the researchers designed a linear elastic actuator in parallel, or LEAP, to serve as the leg. The LEAP uses a voice coil actuator - a highly efficient actuator that operates the same way as a loudspeaker driver - paired with two compression springs.

This leg is connected to a torso that contains battery power, sensors and other electronics. To keep this upper torso level during hopping, the angle of the leg is adjusted at each hop using two standard servo motors. The torso is only about twice as heavy as the leg, whereas most hoppers have torsos that are much heavier in relation to the leg, which helps them achieve dynamic balance.

Wireless Power Charges Any Device in the Room

DIY Produce with No Dirt