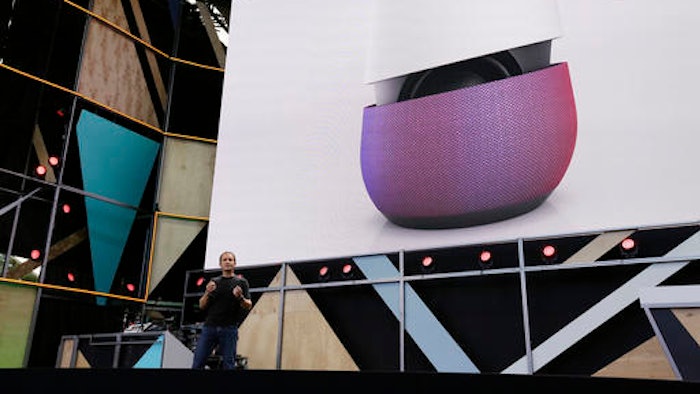 In this May 18, 2016 file photo, Google vice president Mario Queiroz gestures while introducing the new Google Home device during the keynote address of the Google I/O conference in Mountain View, Calif. On Tuesday, Oct. 4, 2016, the search giant will ramp up its consumer electronics strategy with expected announcements of new gadgets including new smartphones and an internet-connected personal-assistant for the home similar to Amazon’s Echo speaker. All are intended to showcase Google’s software and online services.
AP Photo/Eric Risberg, File

SAN FRANCISCO (AP) — Google may be getting serious about selling its own hardware gadgets.

On Tuesday, the search giant will ramp up its consumer electronics strategy with expected announcements of new gadgets including new smartphones and an internet-connected personal-assistant for the home similar to Amazon's Echo speaker. All are intended to showcase Google's software and online services.

A new virtual reality headset and other devices, such as a home router, could also be on tap, according to analysts and industry blogs. Google has declined to confirm any specifics, although it previously described some of these products back in May .

Google makes most of its money from online software and digital ads. But it's putting more emphasis on hardware as it faces rivals like Apple, Amazon and South Korea's Samsung.

New devices could help Google keep its services front and center in the battle for consumers' attention, said analyst Julie Ask at Forrester Research. Unlike a new mobile app or other software, she noted, it can be an expensive gamble to build and ship new hardware products. "But if you're Google, you can't afford to stop placing bets."

Google already sells smartphones and tablets under the Nexus brand, which it launched in 2010 as a way to show off the best features of its Android software. But it's spent relatively little effort to promote those devices, which have mostly ended up in the hands of Google purists. Tech blogs are reporting the company is now planning to launch two smartphone models under a new brand, Pixel, and Google has hinted it may invest in an extensive marketing campaign intended to introduce the phones to the mass market.

Android already powers the majority of smartphones sold around the world. But Samsung, the biggest maker of Android phones, has increasingly been adding more of its own software — even its own Samsung Pay mobile wallet — on the phones it sells. Another big rival, Apple, has built its own services, such as online maps and its own Siri personal assistant, to replace Google's apps on the iPhone.

Home, But Not Alone

The "Home" device will feature Google's digital "Assistant" service, a voice-activated personal butler that can search the internet, play music or perform other useful tasks. "Assistant" is the company's answer to similar concierge services from rivals, including Siri, Amazon's Alexa and Microsoft's Cortana. The leading tech companies are all competing to assist consumers in their online activities such as shopping, since that gives the companies a better chance of selling advertising or other services.

Home-based systems like the Echo are taking on more importance with the advent of improved voice technology, said Forrester's Ask. "You can't assume somebody is going to go sit down at a computer or pick up a phone and type in a question anymore," she said.

Google may also provide a closer look Tuesday at some other products, including a new virtual-reality headset that it teased in May. Like the other devices, Google's virtual reality system could be a platform for a wide range of games and applications that are built on Google's software.