Drone Operators Want to Fly Out of Direct Sight

Companies say the so-called line-of-sight exemptions are essential to someday use drones for such tasks as cleanup and repair after storm damage and monitoring widespread crop conditions. 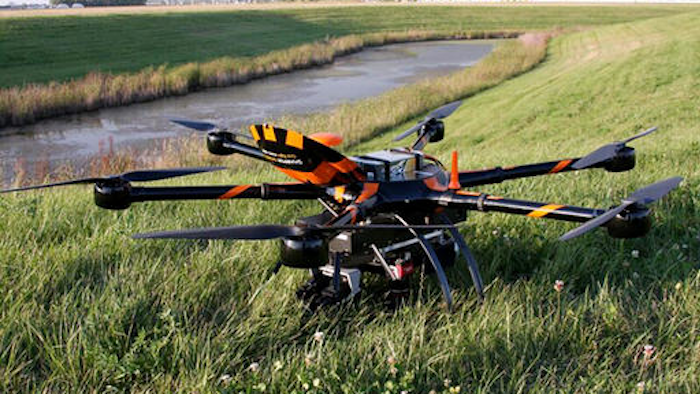 This Aug. 29, 2016, file photo provided by Sharper Shape and SkySkopes shows a Sharper A6 drone before a test to fly over power lines in eastern North Dakota near Blanchard. The drone is specially designed for utility asset inspections. The drone is being tested as part of a project by Xcel Energy to see of unmanned aircraft can help crews restore power to areas hit by natural disasters. Officials with the company hope to be flying beyond visual line of sight by the end of the year.
Sharper Shape and SkySkopes via AP, File

FARGO, N.D. (AP) — As thousands of commercial drones take to the skies under new Federal Aviation Administration rules, some small operators are pursuing a coveted exemption that would allow them to fly their drones where they can't be seen by the pilot.

The companies who want them say the so-called line-of-sight exemptions are essential to someday use drones for such tasks as cleanup and repair after storm damage and monitoring widespread crop conditions.

But thus far, the FAA has only given exemptions to three companies that participated in a year-long FAA pilot program: CNN, BNSF Railway and the drone data company PrecisionHawk. Although some small commercial drone operators say the new rules are too restrictive, the agency says it drafted them in a way that will save lives, minimize damage on the ground and address the concerns of commercial airline pilots.

Matt Dunlevy, whose Grand Forks-based SkySkopes is pursuing an exemption to help provide services such as infrastructure inspections, said it's "extremely important" to expand the waiver program.

"That is the silver bullet that's really going to unlock the potential in our industry," he said.

The FAA expects there will be 600,000 commercial drone aircraft operating in the U.S. within the year, with ultimate plans to have them inspect bridges and rail and transmission lines, assist firefighters, shoot movie footage, gather news, and deliver products, among other uses.

PrecisionHawk, which is based in Raleigh, North Carolina, represents customers in the agriculture, mining, forestry, insurance and telecommunications industries, among others. One of their clients, DuPont Pioneer, is researching the use of drones for improving crop efficiency and practices for growers.

"First and foremost, safety is the top priority," said Lia Riech, PrecisionHawk's vice president of marketing. "We also want to continue pushing the boundaries. Obviously it's important for us to cover the acreage that is representative of our clients."

It's difficult to know which companies are pursuing exemptions, as the FAA won't identify applicants. Dunlevy, the SkySkopes chief executive, estimates that fewer than 50 companies would qualify.

At least one other company operating in North Dakota — Sharper Shape, which manufactures the Sharper A6 drone — is seeking permission. Its drone is being tested by SkySkopes pilots in an Xcel Energy project in North Dakota to see if unmanned aircraft can be used after storms and other natural disasters to help the company move crews, materials and equipment. The project also includes a larger Hermes 450 drone that can cover 62 square miles (160 sq. kilometers) in an hour and fly up to 17 hours before refueling.

The maneuverability of the A6 can help pinpoint a specific area to restore and repair damage, Xcel spokesman Mark Nisbet said.

"We're excited to explore a variety of unmanned aircraft systems because they have the potential to help Xcel Energy assess damage more quickly," Nisbet said. "This capability can lead to more efficient outage response times, save money, bring value to our customers and enhance employee and public safety."

The Sharper A6 drone stretches 6 feet (1.8 meters) from propeller to propeller and weighs about 20 pounds (9 kilograms). Sharper Shape CEO Tero Heinonen says the drone is the first one designed specifically to perform utility asset inspections. It uses four redundant cellular networks to make it virtually impossible for the drone to lose communication with ground control operators, he said.

The company has been flying the aircraft beyond line of sight since 2014 in Finland, where Heinonen founded the company before moving his operations to California and North Dakota.

"It is commercially proven," Heinonen said. "This is something that opens such a huge market that will simply help any American company using drones."