Fuel supplies in at least five states — Alabama, Georgia, Tennessee and the Carolinas — have been threatened by a spill. 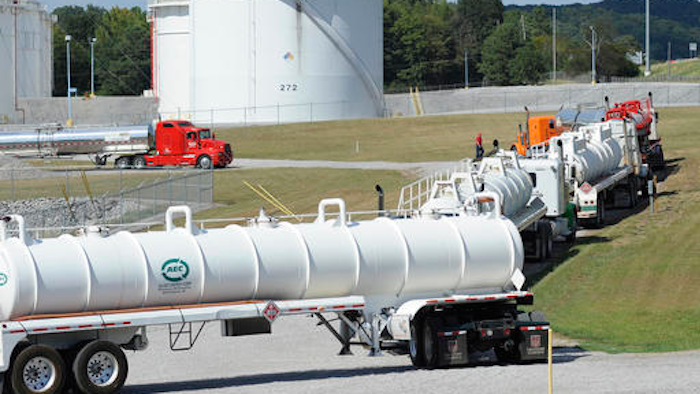 Tanker trucks line up at a Colonial Pipeline Co. facility in Pelham, Ala., near the scene of a 250,000-gallon gasoline spill on Friday, Sept. 16, 2016. The company says spilled gasoline is being taken to the storage facility for storage. Some motorists could pay a little more for gasoline in coming days because of delivery delays.
AP Photo/Jay Reeves

ATLANTA (AP) — Despite some gas station employees saying they've run out, the Georgia governor's office has said they have not received any complaints of gas shortages within the state after a pipeline spill in central Alabama.

"As of now ... we've not received any complaints," Gov. Nathan Deal's spokeswoman Jen Ryan said in a statement Sunday. "If that changes on Monday or at any time in the coming days, the governor's office will act accordingly."

Fuel supplies in at least five states — Alabama, Georgia, Tennessee and the Carolinas — were threatened by the spill, and the U.S. Department of Transportation ordered the company responsible, Colonial Pipeline, to take corrective action before the fuel starts flowing again.

Drivers in Atlanta area found some pumps completely dry or they had to pay 20 cents more because, according to a sign on the pump, the gas had to be pulled from Savannah.

An employee at a QuickTrip in Alpharetta, gasless since Saturday, said Sunday they don't expect to refill until Wednesday or Thursday.

Ingles Gas Express in Hiawassee turned off their price sign lights in an area where gas is becoming scarce, an employee said.

"We just blanked out our sign," said the Ingles employee, who did not want to disclose her name. "Other places are getting small shipments. We might get ours by Tuesday, but it's still up in the air."

A Shell station in Carrollton is only carrying premium grade, a worker said.

Colonial Pipeline announced Saturday it was beginning construction of a temporary pipeline that will bypass a leaking section of its main gasoline pipeline in Shelby County, Alabama. It said Saturday that the line was projected to restart the following week.

The company has acknowledged that between 252,000 gallons and 336,000 gallons of gasoline leaked from a pipeline near Helena, Alabama, since the spill was first detected Sept. 9. It's unclear when the spill actually started.

Gov. Deal issued an executive order last week to suspend limitations on trucking hours, allowing drivers to stay on the road longer to bring fuel into the state. The order said, however, that no motor carrier "shall require or allow an ill or fatigued driver to operate a motor vehicle."

Deal believes his plan will be an effective one if people maintain normal consumption levels and travel routines.

"We are confident these measures will help ensure Georgians' uninterrupted access to motor fuel until Alabama's pipeline is fixed," Deal said in a statement on his website Friday.