Engineer Who Led B-1 Bomber Rollout Dies at 87

The Rockwell International engineer who met President Ronald Reagan's challenge to deliver 100 B-1 bombers as fast as possible in the early 1980s to challenge the Soviet Union, has died. 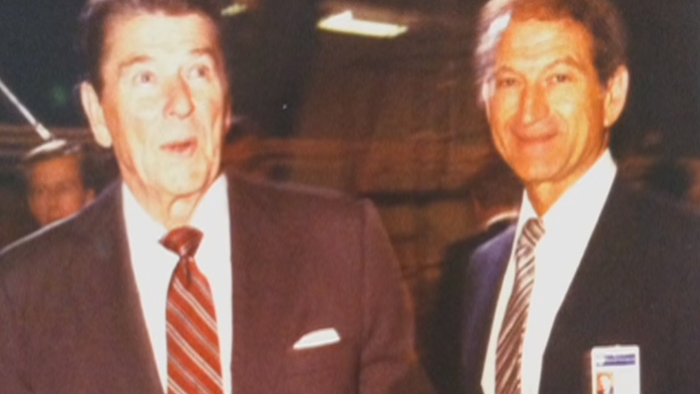 Sam Iacobellis (right) was the engineer who met President Ronald Reagan's challenge to deliver 100 B-1 bombers to challenge the Soviet Union.
MeTVFresno, YouTube

SAN LUIS OBISPO, Calif. (AP) — Sam Iacobellis, the Rockwell International engineer who met President Ronald Reagan's challenge to deliver 100 B-1 bombers as fast as possible in the early 1980s to challenge the Soviet Union, has died.

His son, Sam Iacobellis Jr., said his father died Sept. 3 at a hospital in San Luis Obispo from complications of a stroke. He was 87.

The Los Angeles Times called Iacobellis' mandate one of the toughest manufacturing assignments of the Cold War. Under his supervision, in just six years Rockwell delivered all 100 of the bombers below budget and on schedule, playing a key role in Reagan's plan to bankrupt the Soviets with a military buildup they could not match.

Russians were in awe of the B-1, designed to fly a few hundred feet off the ground near the speed of sound, and were unable to duplicate its capabilities, said Robert Cattoi, former chief engineer at Rockwell.

"A group of us from Rockwell were in Krasnoyarsk (Russia), having dinner with some of their astronauts and Air Force generals, when one of them asked me, 'Do you know Sam Iacobellis? If you see him, tell him he was far more responsible for ending the Cold War than he might realize. We didn't have the resources to match it,'" Cattoi told the Times. "It was the straw that broke the camel's back."

To meet Reagan's plan, Iacobellis had to build an entire new assembly complex in Palmdale, California, create a supply network that extended to nearly every state and create a trained workforce of 40,000 within less than two years, according to the newspaper. It was the kind of buildup that typically would take an aerospace firm more than a decade to execute.

"We worked like we were on the front line of the Cold War," Iacobellis said in a 2001 interview with the Times.

By the time he retired from Rockwell, Iacobellis was one of three chief operating officers, in charge of the company's rocket engines, aircraft and spacecraft operations, including the space shuttle program.

Iacobellis was born in 1929 in Fresno, California, the son of Italian immigrants. He graduated from California State University, Fresno, with a degree in mechanical engineering. He joined North American Aviation, which Rockwell later acquired, starting as a draftsman. He later received a master's degree in engineering from University of California, Los Angeles.