Automated vacuums are the 'beachhead of practical robotics in the world today.' 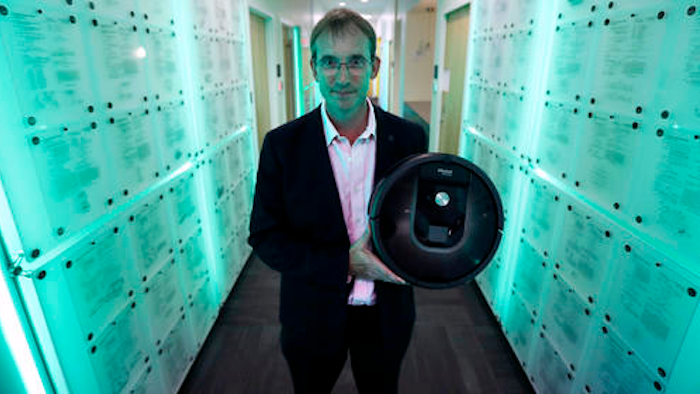 In this Thursday, Aug. 25, 2016, photo, iRobot co-founder and CEO Colin Angle is illuminated in blue-green light while holding a Roomba vacuum in a hallway decorated in patents the company owns, at their headquarters in Bedford, Mass. Angle is transitioning the company from military projects to household robots.
AP Photo/Charles Krupa

BEDFORD, Mass. (AP) — The clash this year over the future of iRobot pitted visionary robotics against the retail success of the company's Roombas, the circular-shaped domestic helpers that have cleaned millions of living rooms around the world.

Colin Angle said he never imagined when he co-founded the company 26 years ago that it would change the way the world views vacuuming. But the chairman and CEO of iRobot also said it's a misconception to think he's running a vacuum cleaner company.

Automated vacuums (view photos in gallery) are the "beachhead of practical robotics in the world today," an important step on the path to the smarter homes to come, Angle said in a recent interview with The Associated Press at the company's headquarters in Bedford, Massachusetts. The mapping software that helps the latest Roomba model remember where it's already picked up dirt could be the building block for future devices that can fetch a glass of water or adjust the lights when a human walks into a room.

"What iRobot is going to be most appreciated for is not going to be vacuums, it's going to be allowing people to live independently longer so that we can maintain our standard of living as a society," Angle said. "That sounds big and grandiose other than the fact that it's a freight train coming down the tracks that we're going to need to address."

After spinning off iRobot's lagging and volatile military robot division in April and fending off a disruptive proxy fight in May, Angle said he's excited about a new chapter for the company that revives its original 1990 goal: building the kind of useful, everyday robots we've spent generations imagining in books and movies.

"It will allow robots to live up to the Rosie the Robot vision that everyone wants robots to be," Angle said. "Hopefully we'll do it in time, before we have to truly face the reality of our aging demographic and the fact that there aren't enough younger people to take care of the older people."

Government demand for rovers capable of performing dangerous military and disaster-relief tasks in the aftermath of the Sept. 11 attacks gave iRobot what Angle proudly describes as a "very important and noble" mission designing robots to keep troops and first responders out of harm's way. It also helped subsidize iRobot's other ambitions. The profits from wartime contracts allowed iRobot to experiment with a variety of other robots, producing some duds and one huge commercial success: the first Roomba, introduced in 2002.

Now it's vacuum cleaners and other home robots that are iRobot's bread and butter. The company divested its defense division in April, spinning it off into a new company called Endeavor Robotics.

"As far as iRobot's concerned, defense has always been somewhat of a wild card," said analyst Bobby Burleson, a managing director at Canaccord Genuity Inc., who said selling the division "has helped focus the company, but also investors, on what the story is."

Spinning off the division wasn't enough to appease hedge fund Red Mountain, which demanded more capital discipline and a stronger focus on consumer products expertise. Company leaders fought back this spring, making the case to shareholders that fortifying the technological prowess of the 550-employee, $1.1 billion company was more important than acting like a traditional, low-tech consumer product maker that devotes its attention to switching up packaging and color schemes.

Shareholders sided with management at their annual meeting in May, rejecting proposals to shake up the board.

"Ultimately, the disagreement was around iRobot's desire to invest in the future versus drive profits up in the shorter term, as far I understand it," Angle said. Representatives at Red Mountain didn't return email requests for comment this week.

Angle said the dispute is now "happily in the past." He traveled to China this week to open a Shanghai office and introduce the company's new Braava jet, a mopping robot that launched in the United States earlier this year but is thought to have a promising market in countries where most homes have hard floors and vacuum cleaners are less common. He also said the company is working on a robot that can help homeowners with another hated task: mowing the lawn.