Combining several antenna elements into a single antenna could speed up data transfer and improve reception. 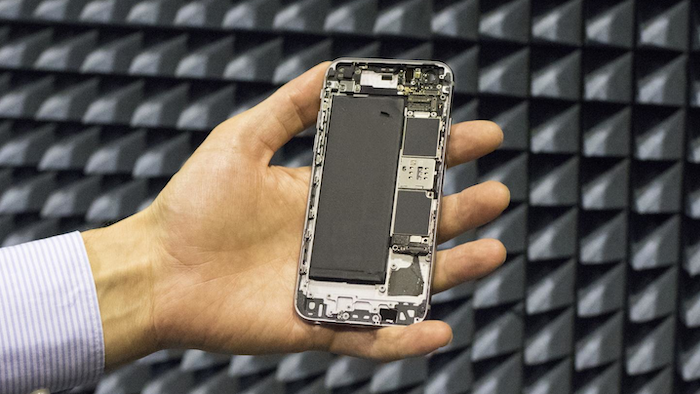 The phone's antennas are placed in the top and bottom, which means that the phone's touch screen does not cover the entire phone. A new method allows the antennas to consume less space, so the phone display can be made larger.
Aalto University

Aalto University's Radio Science and Engineering researchers have developed a method that they feel allows antennas to make the shift from the analogue to the digital world.

Doctoral candidate Jari-Matti Hannula explains. "Traditionally, one antenna works with either one or a few different frequencies. Now we can take advantage of advanced digital electronics and combine several small antenna elements to work together as one antenna that can be made to operate digitally with any frequency. In this way, many smartphone applications like GPS, Bluetooth and Wi-Fi will no longer need their own antennas.

"Instead, all of the phone's data transfer can take place through one digitally-controlled antenna. This in turn makes phone design easier and enables a larger screen size relative to phone size, as the antenna does not require so much space."

Researcher feel the new antenna also makes it possible to reach the data transfer speed set as the objective for the next generation of phones, which is 100 to 1,000 times faster than that of current phones. In addition, battery life will be improved due to the new method's greater efficiency.

These new antennas may also dispose of the analogue components that traditional antennas use to tune into the desired frequency. This could enable the creation of more compact antennas with better radiation efficiency.

The researchers state that with antennas designed using the standard technology, it is possible to obtain either a broad frequency range or high efficiency, but not both at the same time. Antennas' radiation efficiency has also been falling because the frequency range used by mobile phones has been continuously increasing.

Poor radiation efficiency leads to a short transmission range, for which network operators are then forced to compensate with a denser network of base stations. Professor of Radio Engineering Ville Viikari believes that the new method will revolutionize the fifth generation of mobile phones.

"The next step in the development process is under way with the commencement of tests in cooperation with Huawei using fifth generation mobile phone devices. We are also developing together with Aalto University researchers digital electronic systems for controlling the antennas," Mr Viikari adds.

An article detailing the principles of the method has been published in IEEE Antennas and Wireless Propagation Letters.