It will be the first true reuse of a rocket previously used for an orbital mission. The launch will take place this fall. 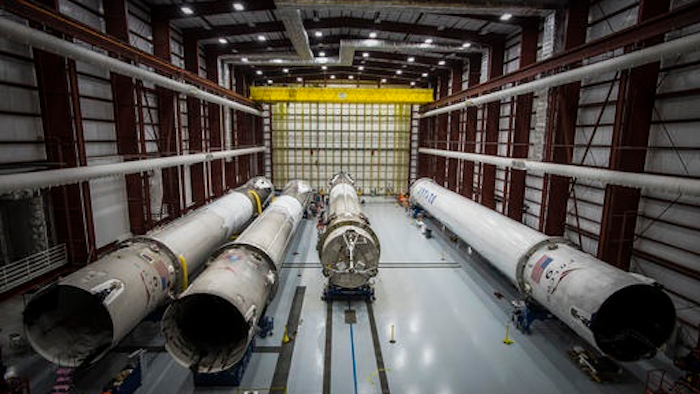 This June 6, 2016 photo made available by SpaceX shows recovered Falcon rocket boosters in a hangar at the Kennedy Space Center on Merritt Island, Fla. The company says it can save considerable time and money by reusing the big, expensive parts.
SpaceX via AP

CAPE CANAVERAL, Fla. (AP) — SpaceX has a taker for the first flight of one of its recycled rockets.

The Luxembourg-based company SES (S-E-S) — a longtime SpaceX launch customer — said Tuesday it will send its next communications satellite up on a previously flown Falcon rocket. It will be the first true reuse of a rocket previously used for an orbital mission. The launch will take place this fall.

Every time its Falcon flies, SpaceX attempts to land the first-stage booster on an ocean barge or back at Cape Canaveral, Florida. The company says it can save considerable time and money by reusing the big, expensive parts normally left to sink at sea. Since December, SpaceX has recovered six boosters following liftoff.