This could prevent problems with traditional lithium-ion batteries exploding and causing fires. 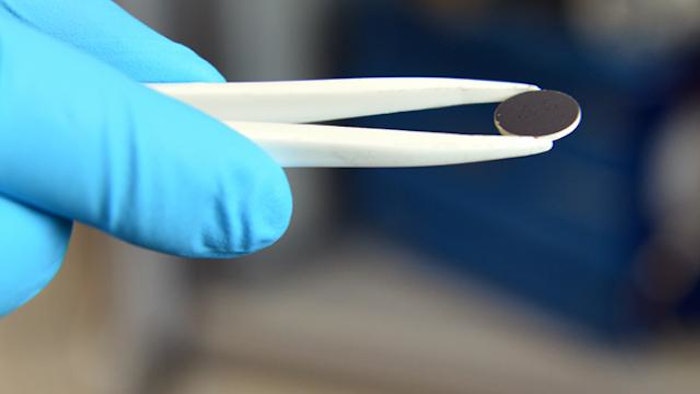 A slice of (white) lithium garnet electrolyte coated with a (black) lithium compound acting as the battery's minus pole in the laboratory of the ETH researchers.
ETH Zurich / Fabio Bergamin

Lithium-ion batteries store a lot of energy in a small space, making them the energy source of choice for mobile electronic devices. Today, mobile phones, laptops, e-bikes and electric cars are all powered by such batteries.

Researchers at ETH Zurich have now developed a type of battery that, unlike conventional ones, consists entirely of solid chemical compounds and is non-flammable.

Conventional lithium-ion batteries are not without their dangers: mobile phone batteries have exploded several times in the past, resulting in injuries, and only six months ago an entire row of houses burned down in the old town of Steckborn on Lake Constance. The blaze was caused by a model-making battery that allegedly caught fire due to being charged improperly.

Solid-State Batteries Can Be Heated

In conventional lithium-ion batteries as well in most other batteries, the positive and negative poles - the two electrodes - are made of solid conductive compounds; charges move between these electrodes in a liquid or gel electrolyte.

If you charge such a battery improperly (overcharging) or leave it sitting out in the sun, the liquid can ignite or the gel can swell up.

This is not the case with solid-state batteries, which are currently in development in research laboratories worldwide: in these types of batteries, both the electrodes and the intermediary electrolyte are made of solid material.

"Solid electrolytes do not catch fire even when heated to high temperatures or exposed to the air," explains Jennifer Rupp, who, as Professor of Electrochemical Materials at ETH Zurich, is leading the development of this new type of battery.

Research at the Interface

One of the challenges in developing solid-state batteries is to connect the electrodes and electrolyte in such a way that the charges can circulate between them with as little resistance as possible. The ETH researchers have now developed an improved electrode-electrolyte interface.

In the laboratory, they constructed a sandwich-like battery featuring a layer of lithium-containing compound (lithium garnet), which acts as a solid electrolyte between the two electrodes. Lithium garnet is one of the materials with the highest known conductivity for lithium ions.

"During production, we made sure that the solid electrolyte layer obtained a porous surface," says Jan van den Broek, a master's student in Rupp's group and one of the authors of the study. The researchers then applied the material of the negative pole in a viscous form, allowing it to seep into the pores. Finally, the scientists tempered the battery at 100 degrees Celsius. "With a liquid or gel electrolyte, it would never be possible to heat a battery to such high temperatures," says van den Broek.

Thanks to the trick with the pores, the researchers were able to significantly enlarge the contact area between the negative pole and the solid electrolyte, which ultimately means that the battery can be charged faster.

Batteries produced like this could theoretically operate at a normal ambient temperature, says Semih Afyon, a former research scientist in Rupp's group, now a professor at the Izmir Institute of Technology in Turkey. But they work best at 95 degrees Celsius and above at the current development state. "The lithium ions can then move around better in the battery," says Afyon.

"Many of today's solid-state battery research projects focus on improving the electrolytes," says Afyon. However, there are few studies such as this one, in which the scientists assembled an entire solid-state battery - using methods also used in industrial production - and tested it.

"In this work we have for the first time built a whole lithium-ion battery with a solid lithium garnet electrolyte and a solid minus pole made of an oxide-based material. Thus, we have shown that it is possible to build whole batteries based on lithium garnet," says ETH Professor Rupp. Thanks to this solid electrolyte one can not only operate batteries at higher temperatures, but also build thin-film batteries, that can even be directly placed on silicon chips.

"These thin-film batteries could revolutionize the energy supply of portable electronic devices," says Rupp. She and her team will pursue this approach in further research. To this end, they have also collaborated with industrial partners as well as with the Paul Scherrer Institute and with Empa. The immediate next step is to optimize the battery, with a particular focus on further increasing the conductivity of the electrode-electrolyte interface.