White light from lasers demonstrates data speeds of up to 2 GB/s. 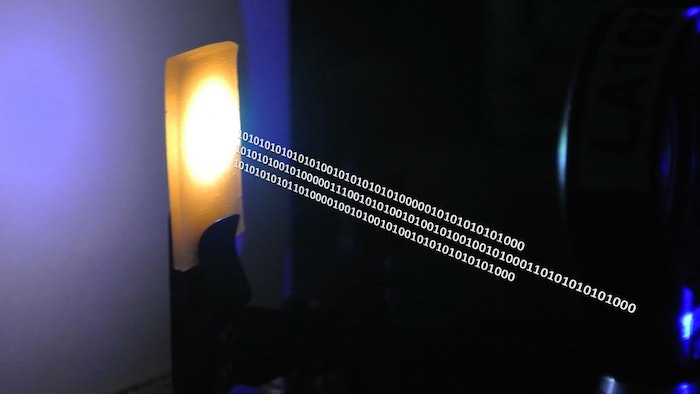 A nanocrystalline material that rapidly makes white light out of blue light has been developed by King Abdullah University of Science and Technology (KAUST) researchers.

While Wi-Fi and Bluetooth are now well established technologies, there are several advantages gained by shortening the wavelength of the electromagnetic waves used for transmitting information.

So-called visible-light communication (VLC) makes use of parts of the electromagnetic spectrum that are unregulated and is potentially more energy-efficient. VCL also offers a way to combine information transmission with illumination and display technologies--for example, using ceiling lights to provide internet connections to laptops.

Many such VLC applications require light-emitting diodes (LEDs) that produce white light. These are usually fabricated by combining a diode that emits blue light with phosphorous that turns some of this radiation into red and green light. However, this conversion process is not fast enough to match the speed at which the LED can be switched on and off.

"VLC using white light generated in this way is limited to about one hundred million bits per second," said KAUST Professor of Electrical Engineering Boon Ooi.

Instead, Ooi, Associate Professor Osman Bakr and their colleagues use a nanocrystal-based converter that enables much higher data rates.

The team created nanocrystals of cesium lead bromide that were roughly eight nanometers in size using a simple and cost-effective solution-based method that incorporated a conventional nitride phosphor. When illuminated by a blue laser light, the nanocrystals emitted green light while the nitride emitted red light. Together, these combined to create a warm white light.

The researchers characterized the optical properties of their material using a technique known as femtosecond transient spectroscopy. They were able to show that the optical processes in cesium lead bromide nanocrystals occur on a time-scale of roughly seven nanoseconds. This meant they could modulate the optical emission at a frequency of 491 Megahertz, 40 times faster than is possible using phosphorus, and transmit data at a rate of two billion bits per second.

"The rapid response is partly due to the size of the crystals," said Bakr. "Spatial confinement makes it more likely that the electron will recombine with a hole and emit a photon."

Importantly, the white light generated using their perovskite nanostructures was of a quality comparable to present LED technology.