Who's Paying the Bill? New Questions Over Water Project 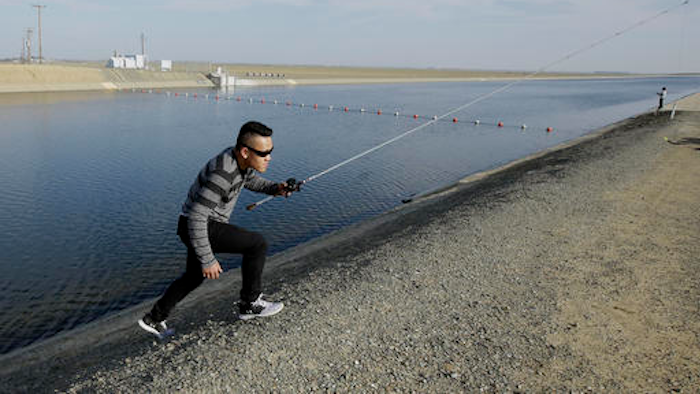 In this Feb. 25, 2016, file photo, Sha Xinog, climbs the bank to get more bait while fishing along the California Aquaduct near Firebaugh, Calif. Critics and a California lawmaker want more answers from Gov. Jerry Brown's administration on who's paying for a proposed giant water project. That's after a Southern California water district said Thursday, Aug. 11, 2016, that Brown's administration is now stating that state or federal funds will be used to finish planning for two $16 billion water tunnels.
AP Photo/Rich Pedroncelli, File

SAN FRANCISCO (AP) — Critics and a state lawmaker say they want more explanations on who's paying for a proposed $16 billion water project backed by Gov. Jerry Brown, after a leading California water district said Brown's administration was offering government funding to finish the planning for the two giant water tunnels.

Critics said the government funding described by the Los Angeles-based Metropolitan Water District on Thursday could run counter to longstanding state assurances that various local water districts, not California itself, would pay for Brown's vision of digging twin 35-mile-long tunnels to carry water from the Sacramento River south, mainly for Central and Southern California.

The $248 million in preliminary spending for the tunnels, which have yet to win regulatory approval, already is the topic of an ongoing federal audit. On Wednesday, state lawmakers ordered a state audit of the tunnels-spending as well.

On Thursday, state spokeswoman Nancy Vogel said that despite the account of the Los Angeles-based Metropolitan Water District, no money from the state's general fund would be used finishing the current planning phase of the twin tunnels. However, opponents of the tunnels and a taxpayer group were critical Thursday, and Assemblywoman Susan Eggman, one of the state lawmakers behind this week's audit order, asked the state Thursday for clarification.

"It's a shell game," said David Wolfe, the Howard Jarvis Taxpayers Association's legislative director. "I think it comes back to the audit (request) yesterday: There are way more questions here than there are answers."

The tunnels project is endorsed by Brown and by some politically influential water districts and water customers in Central and Southern California. Supporters say the tunnels would benefit the environment and offer Californians a more secure water supply. Opponents say they fear the state will use the tunnels to divert too much water from the Sacramento River and San Francisco Bay, harming Northern California and further endangering native species there.

Metropolitan and other water districts slated to get water from the tunnels have yet to commit to paying for them, out of uncertainty whether the massive spending would really bring them enough water to make the cost worthwhile. The same water districts also announced this year they would not pay to complete the current preliminary work on the tunnels unless the project first won regulatory approval.

On Thursday, a monthly report published by the LA-based water district on the tunnels project said, "the state has indicated that any additional funding needs to complete the planning phase will be provided by state or federal sources."

After all that local water districts had spent on the project, including $63 million from his water district, "This is to be expected" that the state would use government money to close out planning, said Bob Muir, spokesman for the LA-based water district. He referred further questions to Vogel, the state spokeswoman.

Vogel said the state intended to pull money to finish the tunnels planning from user fees for an existing, half-century-old water network, the State Water Project.

Tunnel opponents, however, point to a measure state lawmakers passed in 2009 that they say bars the state from spending money on the tunnels until the water agencies that would benefit commit to paying for them.

"Project contractors pledged to pay for this project and they've used financial gimmicks to get around this obligation," said Patricia Schifferle, an environmental consultant and longtime opponent of the proposed tunnels. "It raises questions as to where this money was suddenly found."