USA Cycling, bike manufacturer Felt and several component partners spent more than two years and hundreds of thousands of dollars — if not millions — to build the cutting-edge track bike. 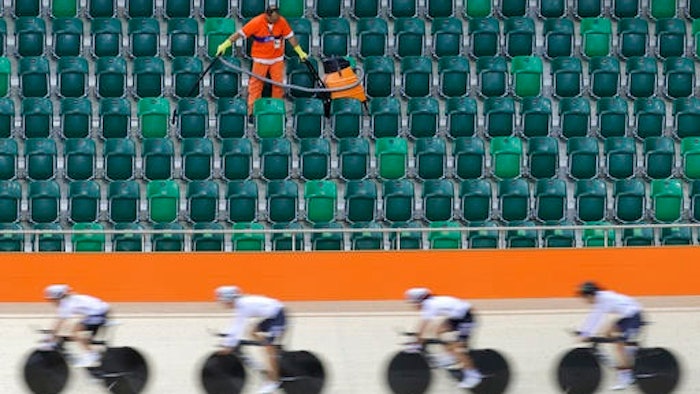 RIO DE JANEIRO (AP) — The first time Chloe Dygert stepped aboard the track bike she will be using along with her women's pursuit teammates, she completely missed what caught everybody else's attention.

The drive train is on the left side.

Yes, just about every bike you've ever seen has the crank on the right, from the high-tech bikes in the Olympic road race to the inexpensive bikes in sporting-goods stores to the itsy-bitsy bikes with training wheels for toddlers just learning to ride.

USA Cycling, bike manufacturer Felt and several component partners spent more than two years and hundreds of thousands of dollars — if not millions — to build the cutting-edge track bike.

High-performance coach Neal Henderson said it should save more than 3 seconds off their U.S. squad's pursuit time. And that is an eternity considering the women posted a world record of 4 minutes, 16.18 seconds at the world championships in March on their old bikes.

Silver medalist Canada and bronze medalist New Zealand were 4 seconds off their pace.

"We zigged when others zagged," Henderson said with a smile.

The drive train is only part of the equation. The bike also takes into consideration specific aerodynamics of a velodrome for the first time, resulting in an asymmetrical stance to account for yaw, specially shaped tubes and high-end carbon that produces a feather-light ride.

"It's a leap. I wouldn't say it's Fosbury Flop-level," Henderson said, referring to Dick Fosbury's revolutionary high jump technique, "but it's an advance."

One that could advance the Americans to the top step of the podium.

Their pursuit squad that will begin chasing gold Thursday won silver at the London Games, albeit with a significantly different lineup. Sarah Hammer is the only rider back and is joined by a bunch of 19- and 20-somethings in Dygert, Kelly Catlin, Jennifer Valente and Ruth Winder.

"I didn't take it for granted when I was asked to be on this team," Dygert said.

They will be pushed by reigning gold medalist Britain, a powerful team from Canada and a banged-up Australian squad that fell heavily in training Tuesday but is still planning to compete.

But the first order of business is qualifying. The finals do not take place until Saturday.

The only medal up for grabs on the opening day of the track program is men's team sprint, where Britain will try to begin a similar gold rush to their one at the London Games.

Jason Kenny teamed with Chris Hoy and Philip Hindes to win the team sprint four years ago, and the home nation went on to win seven gold medals during the track program. The powerful showing came after a similarly dominant effort at the 2008 Beijing Olympics.

The British team pursuit squad will also be in the velodrome Thursday to begin chasing another gold medal. And some star power returned to the squad in former Tour de France winner Bradley Wiggins, who won the London Games time trial before largely retiring from the road.

He is back to his roots on the track, where he won the individual pursuit at the 2004 Athens Games and the Beijing Games, and was part of the team pursuit squad that won gold the same year.

Wiggins can break a tie with Hoy and become Britain's most decorated Olympian with a medal.

"I've gone through this process to try to win a gold medal, really, and anything less than a gold would be a huge disappointment," Wiggins said. "Something would have to go seriously wrong."

Mark Cavendish and the rest of the British team hit the track later in the program.

One of the big questions surrounding the Rio Games was whether the velodrome would be completed in time. The $56 million facility missed several deadlines and went through several contractors, and delays forced the cancellation of a test event scheduled for March.

It received mixed reviews from riders who began training there this week.

"It's a hard track to try and go for the record on just because of the shape," Australian rider Sam Welsford said. "It's got longer straights and shorter bends. The venue is incredible, there is still a lot going on — you see cables laying around all over the place, but all that matters is the track is ready and race day we are ready to go."