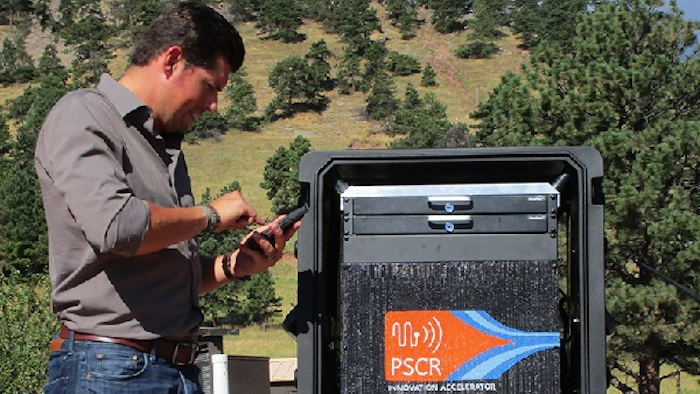 NIST engineer Ben Posthuma demonstrating the use of NIST’s Rapidly Deployable Public Safety Research Platform, a mobile array of commercial technologies that can be set up in strategic locations to enable over 200 local users of broadband smart phones, Wi-Fi, data terminals and older walkie-talkie radios to all communicate with each other. Researchers use this self-contained mobile network for research and demonstration projects to improve public safety communications.
NIST

First responders often have trouble communicating with each other in emergencies. They may use different types of radios, or they may be working in rural areas lacking wireless coverage, or they may be deep inside large buildings that block connections.

To demonstrate improvements to emergency communications and foster research on systems that can be quickly placed in strategic locations, the National Institute of Standards and Technology (NIST) has worked with industry partners to integrate commercial technologies into a mobile wireless communications system. About the size of a large file cabinet, the platform offers more capabilities and faster setup than typical “cell on wheels” systems.

As some users call it fondly on social media, it’s a Nerdcart.

The nation’s estimated 5 million public safety personnel are expected to use a mix of both systems. LTE data transmission rates are 30 to 1,000 times higher than LMR.

“The portable system was built to enable research in diverse environments,” said Tracy McElvaney,an engineering supervisor in NIST’s Public Safety Communications Research (PSCR) Division. “But it is modeled after FirstNet’s image of a vehicle-borne network system and the public safety community’s vision of a rapidly deployable system to be used when the nationwide network is not available.”

“Our role at NIST is not to develop the technology itself, but to integrate the state-of-the-art pieces into a conceptual platform that will help drive the industry to meet publicsafety needs—that is, to make portable systems smaller, more robust and with more capabilities,” McElvaney said.

NIST’s research and demonstration platform was developed through PSCR’s Broadband Consortium, in which more than 70 vendors provide equipment and support.

PSCR staff use the system for research projects such as evaluating how to improve audio intelligibility amid crowds and background noise and the development of a database of communications in high-stress, loud-noise environments.

The platform enables research into factors considered critical to the public safety mission, such as how to establish “push to talk” (i.e., using a button to switch from sending to receiving) capabilities over broadband systems.

PSCR staff recently tested the system at a convention center and a stadium in Harris County, Texas, an early adopter of LTE technology for public safety.

“Typically, it takes on the order of hours to deploy a ‘cell on wheels’ system to provide coverage at an event, and multiple deployable systems are needed to enable both LTE and LMR” McElvaney said. “Our system provides LTE, LMR, video and data. We rolled the system from the vehicle into the building, and once connected to an AC power outlet, we were making calls in less than 5 minutes.”

The mobile system can also be connected to the internet, satellite or a commercial cellular network to link users to a broader community. PSCR staff are currently exploring integrating sensor data and analytics into the system, and developing requirements for linking up with both personal area networks that are already in place as well as temporary Incident Area Networks, which are created as needed and can expand as an incident grows in size and complexity.

NIST has Cooperative Research and Development Agreements (CRADAs) with the partners contributing to the mobile platform. CRADAs are the principal mechanism used by federal labs to engage in collaborative efforts with nonfederal organizations and allow the exchange of resources with private industry to advance technologies that can then be commercialized for the benefit of the public and the U.S. economy.

The mobile net is just one of a number of deployable systems PSCR plans to evaluate and leverage for research. Others include backpack systems that can rapidly serve a small team of users, vehicle-mounted systems and perhaps airborne systems.

The work was funded, in part, by the Department of Homeland Security’s First Responder Group.