The boy uploaded the widely viewed videos to his YouTube channel last year. One shows a flying drone equipped with a handgun firing rounds. 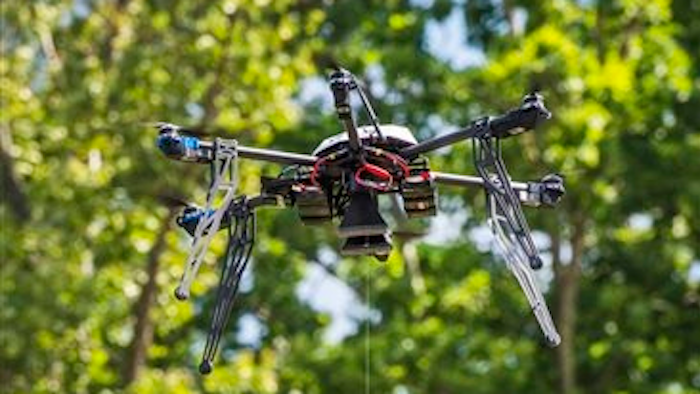 NEW BRITAIN, Conn. (AP) — A teenager who posted online videos of flying drones shooting a gun and a flamethrower in his backyard appeared in court Monday to fight his expulsion from Central Connecticut State University.

Austin Haughwout, 19, is suing university officials in an effort to return to school, and on Monday in New Britain he challenged the process that led to his expulsion, WTIC-AM reported.

Central Connecticut State officials say Haughwout was kicked out for threatening to shoot people at the school. An attorney for Haughwout says what some may have interpreted as threats were actually jokes, protected by free speech.

Haughwout believes his drone videos were the real reason he got kicked out. School officials have denied that.

Haughwout uploaded the widely viewed videos to his YouTube channel last year. One shows a flying drone equipped with a handgun firing rounds. Another shows a flying drone with a flamethrower lighting up a spit-roasting turkey. Both videos were recorded in the family's yard in Clinton.

The videos led the Federal Aviation Administration to subpoena Haughwout and his father late last year, saying the weaponized drones were capable of causing serious injury to people or property.

Haughwout and his father, Bret Haughwout, refused to comply at first, saying the subpoenas violated their constitutional right to be free from unreasonable searches and seizures and questioning the agency's authority to regulate recreational drones.

Last month, a federal judge in New Haven ordered the Haughwouts to comply with the FAA subpoenas.

Austin Haughwout has been in and out of the news over the past two years.

In 2014, a woman was charged with assaulting Haughwout because she was upset he was using a drone to record video above a beach in Madison. Haughwout posted footage of the confrontation on YouTube.

With your understanding of how it works.
Sep 22nd, 2021
Follow Us
Most Recent