Seventy-six workers have died, most in their 20s and 30s. 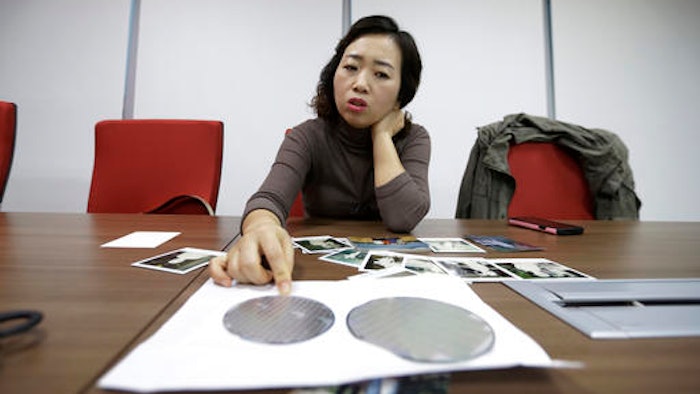 In this March 5, 2016 photo, Park Min-sook, 43, a former Samsung chip worker and a breast cancer survivor, explains how silicon wafers are used in the semiconductor process during an interview in Seoul, South Korea. An Associated Press investigation has found South Korean authorities have, at Samsung’s request, repeatedly withheld crucial information about the chemicals that workers were exposed to at its computer chip and liquid crystal display factories. Workers who have fallen ill due to the chemicals have the right to access such data so they can apply for workers’ compensation from the state. Without this information, government officials commonly reject their cases.
AP Photo/Ahn Young-joon

SEOUL, South Korea (AP) — Samsung Electronics, the leader in the global computer chip and smartphone industries, is South Korea's biggest company, with about 100,000 workers. An Associated Press investigation found South Korean authorities let Samsung withhold from sick workers (see photos in gallery) and their families crucial information about the chemicals they are exposed to at its computer chip and display factories.

A worker-safety group has documented more than 200 cases of serious illnesses including leukemia, lupus, lymphoma and multiple sclerosis among former Samsung semiconductor and LCD workers. Seventy-six have died, most in their 20s and 30s.

It is extremely difficult for workers to get compensation for occupational diseases from the South Korean government, and without details on their exposure to toxins in their workplaces it is almost impossible.

Here are comments from Samsung workers and their families:

"In a situation where people's lives are at stake, (Samsung) brought uninformed kids from the countryside and acted like money is everything, using them as if they were disposable cups."

HWANG SANG-GI, father of Hwang Yu-mi, a former Samsung factory worker who died of leukemia at the age of 22. Hwang launched a movement seeking independent inspections of Samsung factories:

"(Samsung) once offered me 1 billion won ($864,000), asking me to stay silent. The idea was to deny her illness was an occupational disease and to leave me without any power to fight back."

PARK WON-HEE, 42, a former Samsung chip worker diagnosed with lupus who cannot hold a regular job because of her illness. She is a single mother of a teenage daughter:

"My house is subsidized by the government. My child is young. I asked my sisters and they don't have money. I feel bad for people who cannot get compensation (from Samsung) but we are in an urgent situation. I asked for it to provide a better life for my child."

SONG BOK-JA, 72, mother of former Samsung worker Chung Ji-yeon, who died of leukemia when she was 34:

KIM MI-SEON, 36, a former Samsung display worker who lost her sight after being diagnosed with multiple sclerosis. Kim lives in a government-subsidized apartment with her sisters.

"There was never any education (at the factory) about what kind of chemicals could be bad so that we could be more careful."