After months of delays due to cracking screens, the nearly $2,000 phone will re-launch on Sept. 6 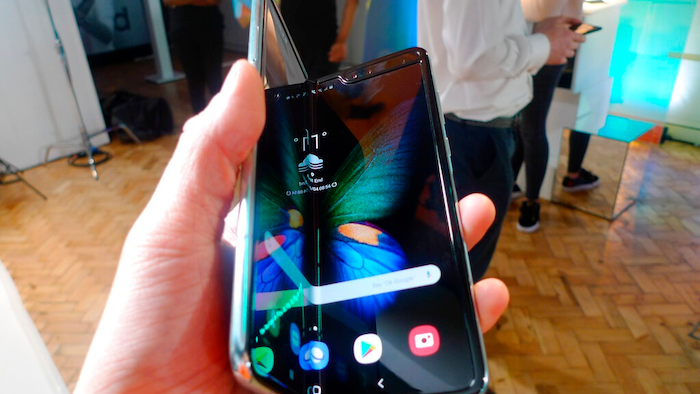 In this Tuesday April 16, 2019 file photo, the Samsung Galaxy Fold smartphone is presented during a media preview event in London. Samsung is hoping the innovation of smartphones with folding screens reinvigorates the market. Samsung says it will start selling its highly anticipated folding phone on Friday Sept. 6, 2019, after its original launch date was delayed by months because of embarrassing problems with the screen.
AP Photo/Kelvin Chan, File

LONDON (AP) — Samsung says it will start selling its highly anticipated folding phone on Friday, after the original launch date was delayed by months because of embarrassing problems with the screen.

The South Korean tech giant had put the Galaxy Fold's launch on hold after reviewers encountered problems with the device's innovative folding screen, which the company indicated on Thursday have now been resolved.

"During the past several months, Samsung has been refining the Galaxy Fold to ensure it delivers the best possible experience," the company said in a statement. "Not only we improved the Galaxy Fold's design and construction, but also took the time to rethink the entire consumer journey."

The nearly $2,000 phone will launch on Sept. 6 in South Korea, and Sept. 18 in France, Germany and Britain, with versions for next generation 5G networks available in the latter two countries.

Other markets including the U.S. and Singapore will follow, but the company did not specify dates.

The Galaxy Fold's original April launch was pushed back after reports that some reviewers' phones were breaking.

Journalists who had received the phones said the folding screen started flickering and turning black before fizzling out. Two reviewers mistakenly removed an outer plastic layer from the screen that was supposed to stay on.

Samsung has said the composite polymer screen can be opened and closed 200,000 times, or 100 times a day for five years.

The delay was a setback for Samsung and for the broader smartphone market, which had been looking to folding screens as one way to catalyze innovation in the industry.

China's Huawei also announced its own folding screen phone, the Mate X, at around the same time, but it hasn't yet set a launch date.

The Galaxy Fold is slightly longer and narrower than a standard smartphone when folded, but opens up to the size of a small tablet, with the internal screen display bisected by a crease. It also has another screen on the outside so it can be used when closed.

Samsung's 2016 launch of its Galaxy Note 7 was also troubled, with the company forced to eventually recall the phone because its batteries were catching on fire.

Samsung May Test Every Single Battery