Company plans to land a hopping, washing machine-sized vehicle on the moon. 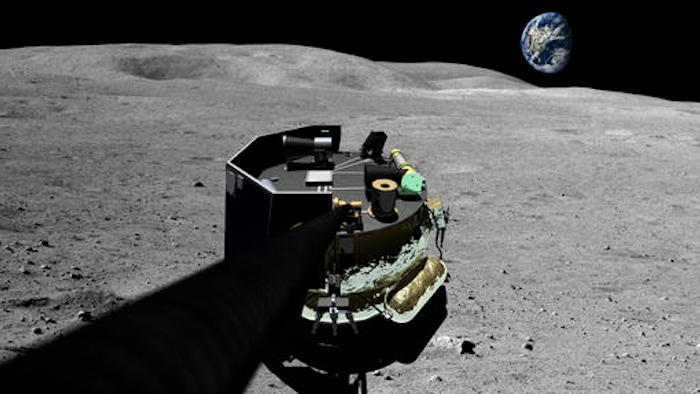 The $10 million flight is the first of many planned missions where they hope to make money extracting lunar resources, like platinum, and selling moon dust and rock collectibles.
Moon Express via AP

WASHINGTON (AP) — The federal government for the first time has given permission to a private Florida company to fly a spaceship beyond Earth's orbit and land on the moon.

The Federal Aviation Administration gave clearance Wednesday to Moon Express to land a washing machine-sized vehicle on the moon that would take hops across the lunar surface using engine firings instead of roving on wheels.

"Why crawl when you can fly," said Moon Express CEO Bob Richards. He called the company's planned lunar ship a "single-stage hot rod of space."

The Cape Canaveral-based Moon Express plans to launch late next year, probably out of New Zealand, on a rocket that has yet to fly, Richards said. The $10 million flight is the first of many planned missions where they hope to make money extracting lunar resources, like platinum, and selling moon dust and rock collectibles, he said.

Getting the OK — not technically a license but a determination that it would do no harm and the company can go ahead — "is a milestone and it is not implausible that they will succeed," said retired space policy expert John Logsdon of George Washington University.

The company, is also competing with several other groups for the Google Lunar X Prize . The $20 million prize will go to the first private firm to get a lander to the moon that can then move a bit. But Richards said that's not the main way the firm hopes to make money.

Richards said the first flight has five customers, including a company that is selling the opportunity to take people's ashes to the moon. His parents' ashes will be on the flight. He said they used to sing the song "Fly Me To The Moon" to him "and I'm going to." The company uses a Diana Krall recording of the song for its telephone hold music.

However, Richards said his firm hasn't finished building the lander and hopes to unveil a new design in September, which he said is "about the size of R2-D2" from Star Wars and will be propelled by environmentally friendly hydrogen peroxide.

The plan is to fly on a rocket built by Rocket Lab , which has yet to launch a ship. If that doesn't work the FAA approval is done in a way that they could just hire another firm, like SpaceX, Richards said.

The governments of U.S., China and the former Soviet Union have landed rovers on Mars, with the Chinese Jade Rabbit rover just retiring. No human has stepped on the moon since 1972.